In the open-world game of Free City, a non-player character called Guy (Ryan Reynolds) suddenly becomes self-aware and deviates from his original programming. Initially seen as a glitch or a hacker, Guy becomes a worldwide viral sensation as he performs heroic deeds and inspires other NPCs to live beyond what they were assigned to do. This is noticed by game developers Millie Rusk (Jodie Comer) and her former partner Walter “Keys” McKey (Joe Keery), who originally developed the code for the game that Free City became, but it was stolen by Keys’ current boss, Antwan (Taika Waititi), who just wants to turn Free City into a generic cash-grab franchise.

With Guy’s antics threatening the launch of Free City 2, Antwan attempts to get Keys and his new partner Mouser to delete Guy, but Guy ends up helping Millie gather evidence that Antwan stole the code in the form of a video showing an island that is part of the game’s original build. After rounding up all the other NPCs and inspiring them to migrate to the island, Antwan tries to have Guy and Millie’s avatar, Molotov Girl, deleted from the game, but Keys helps them get closer to the island.

Antwan sends a bigger and dumber copy of Guy called Dude to beat him up, but Guy manages to get Dude on his side. Realizing his crimes are almost found out, Antwan attempts to destroy the game’s servers to delete everything, but Guy manages to make it to the island in time, which is seen by gamers all over the world. Millie makes a deal with Antwan to take the code back so he can keep the Free City name to develop his franchise. This bites him hard as sales for Free City 2 tank and he gets wrapped up in controversies at work and in the media.

Millie, Keys, and Mouser develop their own game with the NPCs from Free City still saved, and Millie parts ways with Guy so she can focus on her work, and she also later starts a relationship with Keys. Guy continues to enjoy his new world with his best friend Buddy. 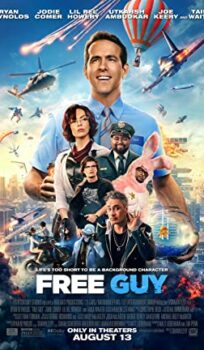