POOPER
In 1865, Newton and Rachel have a son. Since they cannot legally marry, he deeds his land to her so they can live together for the rest of their lives. In 1947, Davis is found guilty of miscegenation and sentenced to five years in prison, but the Mississippi Supreme Court throws out the conviction so he can’t challenge the law at the US Supreme Court.

LONG VERSION
Based on a true story and set in 1862, Newton Knight (Matthew McConaughey) is a poor farmer from Jones County, Mississippi, and he is serving as a medic with the Confederate Army in the American Civil War. During a battle, his nephew Daniel is shot and killed. He flees the battlefield with Daniel’s body to return him to his home, but decides not to return to the war. Now back home with his wife Serena (Keri Russell), he tells her of how he learned that the Confederates are seizing land and property as taxes. After helping another family fend off a raid of their assets by the army, Newton is hunted as a deserter and is wounded. He flees to the swamp, where he is tended to by Rachel (Gugu Mbatha-Raw), the house slave of a family friend. With her husband now wanted, Serena and their toddler son leave Jones County for their protection. Her marriage to Newton is later annulled due to abandonment. While Newton is in hiding in the swamp, he befriends Moses (Mahershala Ali), the leader of a group of runaway slaves. With Newton’s help, he arms the runaways to defend themselves and other families from the army, and he also teaches Rachel how to shoot and read. Newton and Rachel are also starting to show feelings for each other.

The story then shifts to 1947, where Newton’s great-grandson Davis (Brian Lee Franklin) is in court facing charges of miscegenation (the mixing of racial groups). Since it’s believed Davis is a descendant of Rachel, that makes him part-black, and the law makes it illegal for him to remain married to his all-white wife Junie Lee. For the rest of the movie, the story shifts back and forth between the 1860’s and the court case, as the events depicted in the past are used as evidence in the court case. For example, since Serena had moved to Georgia, she couldn’t have been with Newton when Davis’ grandfather was conceived.

Newton’s story shifts to 1863, and many Confederate soldiers are deserting the army following the loss at the Battle of Vicksburg. Many of them flee to the swamp, where they join up with Newton and the runaways. Together they form a militia, as well as a small town in the swamp in order to have a life. When the Confederate Army shows up to raid the town, the militia fights them. The army offers clemency to anyone who will surrender, and a few of the deserters and their families do. But instead of being freed, they’re hung. Newton rallies the group to continue the fight, and they get their revenge at the funeral of those hung, killing several soldiers in the process. As time goes on, more and more deserters join Newton’s militia, and they continue to fight the Confederate Army. After a decisive battle, the Confederate flag is replaced by an American flag, and Newton later declares their land the Free State of Jones.

Two years later, the war is over, and the Free State of Jones is still in existence. Rachel is a schoolteacher in the community, and is also carrying Newton’s baby. Serena and their son return, and Newton welcomes them to live in the community. She later helps take care of Rachel and Newton’s baby. Even though the war is over and the slaves (now Freedmen) are emancipated, many are still being forced to work, so he and Moses are fighting to free them. They are also fighting for the Freedmen’s right to vote, which is being challenged by several former Confederates, including the newly formed Ku Klux Klan. Moses is pursued by the KKK for registering Freedmen to vote and is lynched by them. When Election Day arrives, Newton leads the Freedmen to the voting booth so they can vote for the Freedmen-friendly Republican Party. However, the anti-Freedmen Democrats easily win the clearly rigged election. Years later, the law is increasingly unfriendly to blacks, and the KKK is killing blacks by the thousands with no repercussions. Rachel wants to leave Jones and move north for their son’s safety, but Newton won’t leave the land his family has lived in for years. Since Mississippi law prevents the marriage of blacks and whites (miscegenation), Newton deeds his land to Rachel, making her the landowner. They live together on the land for the rest of their lives.

As for the court case, Davis can get the charges dropped on the condition he gets the marriage to Junie Lee annulled and leaves Mississippi forever. After talking it over with her, and even considering moving north so the marriage will be recognized, he refuses the offer, so he is found guilty and sentenced to five years in prison. He appeals to the Mississippi Supreme Court, and they agree to throw out the conviction so he can’t challenge the law at the US Supreme Court. 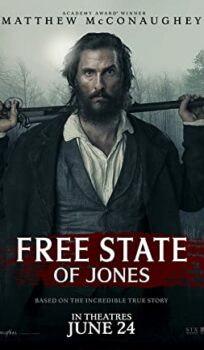