Short Version:
Alex (Emilio Estevez) lives in the future, keeps his mind, reunites with his girlfriend (Rene Russo) from 18 years ago, and gets the identity of the man (Anthony Hopkins) who wanted body.

Long Version:
In exchange for not getting killed, Victor (Mick Jagger) reveals to Alex (Emilio Estevez) that it’s his girlfriend Julie’s (Rene Russo) boss Ian McCandless (Anthony Hopkins) who needs his time-teleported body, then gives him 15 seconds to run away. Alex takes Julie as “hostage” to go to visit Mark Michelette (Jonathan Banks), the Nr. 2 of the company. Michelette doesn’t fall for it, because he knows that Julie is his girlfriend; he also reveals that he was in charge of the second hit squad that tried to kill Victor’s team, because he wanted his boss to die in order to take over the company. When Alex and Julie try to escape, the elevator brings them to the “switchboard”, where the transfer of McCandless’ mind is started. The transfer is interrupted by Julie, who shoots into the machine. Alex stands up, and proves his new identity as McCandless by telling his ID code, then orders Victor to shoot McCandless, which is done. Alex then goes to his car and drives away. On the street, he meets Victor, who tells Alex that the real McCandless couldn’t drive, and tells Julie that Alex lied when he told the ID code, smiles, and lets Alex drive away with Julie. 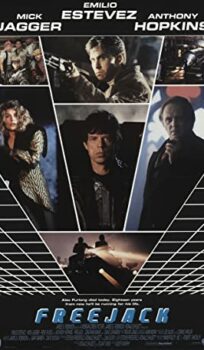