One day, Carolyn (Jane Seymour) reaches her limit with Dave (Josh Lawson), Emma (Zoe Boyle), Trane (Warren Hutcherson), Vic (Clifton Collins Jr.), Fritz (Nat Faxon), and Benny (Kevin Sussman) running off prospective buyers of Adam Duritz’s (himself) mansion, so she has a chat with Sam (Brit Morgan) and explains how they will never be able to sell the mansion as long as the group is there. Sam suggests that they call Adam, but Carolyn refuses, saying that calling the client before the house is sold would be a sign of weakness. Carolyn tells Sam that they should help the gang find new living arrangements, so she has her go to the house to invite them to lunch to discuss the matter. Sam gets there at the same time Adam’s fiancé Yue Jie (Gwendoline Yeo) arrives with her parents, intending to lodge there during their stay in Los Angeles before flying out to New York to meet with Adam, and they all walk in on a pornographic sex scene being filmed there (Benny permitted it in the group’s efforts to raise money to make at least a down payment on the house). Sam glares at Dave from afar and walks out, believing that he masterminded this, and a furious Adam later calls the guys to chew them out over what happened, but they calm him down by spinning a cover story.

The group – sans Vic for some reason – attend the lunch meeting (during which Sam won’t directly talk to Dave) and turn down all of Carolyn’s alternatives, but upon their return to the mansion, they find the whole place covered with a huge extermination tent and Dave Foley (himself) – who recently moved in with them – sitting out front. The group realizes that Carolyn had tricked them into leaving and had the place fumigated so they couldn’t go back inside right away. Trane, Fritz, Emma, Vic, Benny, and Dave Foley later sit around the pool and discuss how they can make some serious cash fast, and they ultimately decide to hold a huge party and have the partygoers make donations to help them purchase the mansion under the guise of a fake charity for canine AIDS, and they agree to keep Dave in the dark about the charity’s true purpose. Meanwhile, Dave creates and sends to Sam a CD of songs apologizing to her, and he says in one of the songs that, while his life sucks, she is the best part of it.

Come the night of the party, there is a huge turnout, with people making cash donations in a big vase or writing cheques. Dave then sees Sam arrive and walks up to and chats with her, and after she confirms that she got the CD, she kisses him. When they get to talking about the huge tent still covering the house, she tells Dave that she quit Carolyn’s employ after she found out that she did this. The next morning, the gang discovers that their efforts were all for nothing: The big vase full of cash has been stolen, and the $500,000 in cheques are all made out to actual charities and are therefore untouchable to them (Dave is also enlightened to the charity’s true purpose during this, but he ultimately doesn’t really mind since they did some legitimate fundraising). Understanding that they are defeated now, Dave convinces the gang to help him fix up the house and help Carolyn sell it because they owe that to Adam for all of the hospitality he has shown them, and they – along with Sam and Dave Foley – get the place tidied up and the tent removed.

Carolyn arrives at the mansion later on with a potential buyer in Denise Richards (herself), and the gang is sitting out back by the pool with Sam and Dave Foley, having accepted their impending homelessness and telling each other that they will miss each other. Emma and Dave Foley start kissing, and Sam expresses pride in them for raising money for charity and for neatening up the house. Carolyn then brings Denise outside to meet the gang, and Denise decides to buy the place, so she and Carolyn go back in to get the papers signed. Just then, Trane gets a call on the phone from the front gate, and he tells Benny that someone is here to see him. Benny and the gang go into the lobby and finds a Nigerian man there with his two bodyguards, and he introduces himself as Mr. Abaeze (Garrett Morris), a lawyer who represented a Nigerian multimillionaire with the same surname as Benny. He had written to Benny days earlier over the Internet about how his client died in a car crash last year and left no heirs to his fortune, so he requested his help to legally name him the beneficiary so he could get his piece of the pie and prevent the government from taking all of it. Benny therefore sent him $110,000 that he collected from selling some of Adam Duritz’s belongings to cover taxes and legal fees and such that was initially supposed to be used towards the down payment on the mansion, and when he told his friends about it, they believed at the time that he was the victim of an advance-fee scam. Mr. Abaeze then gives Benny a cheque for $8.3 million and thanks him for providing him and his firm with the funds. Realizing that the gang can buy the house now, Sam tells Dave to call Adam immediately.

The group soon meets with Carolyn and Denise just as the latter has started putting the ink on the papers, and Sam informs Carolyn that she has just sold the house to Benny for $5 million. When Carolyn protests since this place is her listing, Dave tells her that he has just spoken with Adam and filled her in on what Carolyn did to them, so Adam has fired her and made Sam his new realtor. She threatens to sue, but Benny discourages her from doing so and introduces her to Mr. Abaeze, who is now his attorney, and then he has the bodyguards seize her and carry her out of the house. Trane declares that they should hold another party to celebrate.

The movie closes with the party in full swing, and the Counting Crows are there and they perform “Hanginaround” for the duration of the credits. 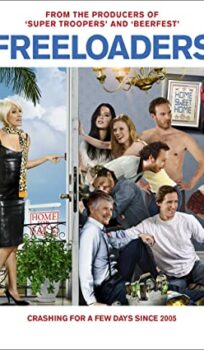