POOPER:
Jason’s mother is the killer.

Long Ending:
The movie opens with us watching two teenage counsellors at Camp Crystal Lake. They are making out and clearly want to take it to the next level. They go into an unoccupied building and start getting more hot and heavy. They are then interrupted by a person off camera. The boy grins sheepishly and says they were just fooling around, but is stabbed in the neck. The girl screams in terror as the unseen assailant walks towards her, and her screams are caught in freeze frame.

We jump ahead several years to see a girl named Annie is backpacking through a small town on Friday the 13th. She stops into a diner to ask for a ride to Camp Crystal Lake where she has been hired as a cook for the reopening in a week. The townsfolk get nervous, but one man offers to drive her most of the way there. She is also warned by a creepy old man that nothing but death awaits her at Camp Crystal Lake. We also meet three teens, Jack (Kevin Bacon) and Marcie who are dating, and their comedic friend Ned, who are also driving to the camp to work as counsellors. The camp was bought and is being re-opened by Steve Christy. He is already on-site there with his possible romantic interest Alice (Adrienne King), and counsellors Brenda and Bill. We also discover that a boy named Jason drowned while at the camp several years ago on Friday the 13th, and the next year on the same day, two counsellors were slaughtered (the ones from the opening credits) and the camp closed until now.

When Annie is dropped off near the camp, a jeep swings by to pick her up after a few moments to take her the rest of the way. Annie expresses her excitement at finally having a chance to work with and help inner city kids. Her enthusiasm turns to terror when the driver (whose identity remains a mystery to the viewer, until the end of the film) speeds past the entrance and won’t stop driving. Annie leaps out of the car and runs into the woods, but is caught and killed by the driver, our film’s killer.

Jack, Marcie and Ned arrive and are put to work by Steve, while he drives into town to get more supplies. The counsellors finish their chores and goof off in the lake, none of them knowing they are being watched by a figure in the woods. They begin making lunch when a deputy drives up and warns them that the crazy old man has disappeared and was sighted coming to Camp Crystal Lake. Several other bad omens occur that the counsellors simply brush off. They do eventually find the crazy old man, but he simply warns them all they are doomed before heading back for town.

Jack, Marcie and Ned return to the lake after lunch, but Ned wanders unnoticed by them into a nearby cabin when Marcie and Jack start making out. It begins to rain, and Marcie, who confides to Jack she is scared of the rain, walks with Jack into the cabin where Ned was and they strip down and have sex. They don’t notice that Ned’s corpse is in the bunk above them. Meanwhile, Alice, Brenda, and Bill are hanging out in the main lodge, smoking dope and playing strip Monopoly. Brenda goes to the bathroom, and Jack discovers Ned’s body above him, but is killed before he can react. Marcie is dispatched later in the bathroom.

Meanwhile, Steve’s car gets stuck in mud and he catches a ride back to the Camp entrance with a deputy, who promises to return the next morning and take Steve back to his car. As he walks towards the campgrounds, he meets the killer (still off screen) and recognizes the killer. But, he is unaware that the person is a killer and is easily dispatched. At the lodge, the Monopoly game ends and Brenda returns to her cabin when the power goes out. She hears a mysterious voice in the woods and when she goes to investigate, lets out a scream before being killed. Mike and Alice re-start the generator, and see lights on at the archery range and hear Brenda’s scream. They investigate, but find nothing besides a bloody axe lying in Brenda’s bed. They go to the camp office, but the phone lines are down (little do they know, the lines have been purposefully cut). They decide to wait in the lodge for Steve’s return, not knowing that he won’t be coming back.

The lights go out again and Mike promises lice he will “be right back” once he restarts it. After several minutes, she goes out to look for him and finds his dead body pinned to the door of the generator store room. She runs back to the lodge where Brenda’s dead body is thrown at her through the window. Alice barricades herself in, but soon flees outside when she sees a jeep heading down the drive.

From the jeep steps…. a woman, named Pamela Voorhees (Betsy Palmer), a friend of Steve’s. Alice takes Pamela to see the dead bodies and Pamela begins to talk about the curse of Camp Crystal Lake. She notes that she worked there as the cook many years ago, when her son named Jason drowned while the counsellors on duty were off having sex. She then reveals that Jason has demanded the Camp stay closed, and she killed the counsellors the next year and has slaughtered everyone in this film. Pamela clearly has multiple personality disorder, as she talks to Jason and, using her voice, Jason talks back. She tries to kill Alice, though Alice manages to escape her clutches several times before fleeing to the shore of the lake. Pamela confronts her once more, but this time, Alice manages to kill her. She then flees to the middle of the lake in a canoe, where she passes out.

The next  morning, she awakens and sees police all along the shore. As she waves to them, a monstrous boy (Jason) leaps out of the water and drags her into the lake. We then cut to a hospital, where a confused and now-sedated Alice lies in bed. The doctors ask her what has happened, but she simply asks if they found the boy in the lake. They say no, And Alice says that he must still be out there (indeed she is right, as there are multiple sequels with Jason as the killer). The police and doctors look at each other uneasily, and the film ends with the camera gazing out over a now-calm Crystal Lake. 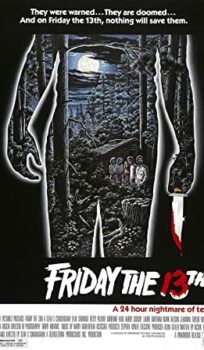