Alexa’s (Katherine Bailess) conniving ways succeed in causing tension between Justin (Justin Guarini) and Kelly (Kelly Clarkson), but when she tries to make her move on Justin by kissing him, he doesn’t return her affections. Kelly sees the kiss from afar, and that night, when she demands an explanation from Alexa, she lies by saying that Justin told her that he was only seeing Kelly to get close to her, and the kiss was unwanted.

Justin tries to talk to Kelly while she, Alexa, and their friends are at a club later on, but Kelly confronts him about what Alexa told her. Justin informs her that Alexa came onto him, and she did it to break them up, but then he tells her that he was tired of her messing with him, anyway, blowing him off one minute and then leaving him text messages the next (which Alexa had done, since she had given Justin her cell phone number and not Kelly’s). He declares to the now-confused Kelly that they are through.

Shortly after Kelly returns to her friends, Alexa drops her cell phone. Kelly picks it up and discovers all of the text messages Justin had accidentally sent Alexa that were meant for her, and she knows now that Justin was right about Alexa. Alexa pathetically tries to explain why she did what she did, but Kelly tells her that what she did to her was something that she herself would never do to a friend, and then she leaves.

The heartbroken Kelly makes her way down to the spot on the beach where she first met Justin, and as she sings about her love for him, he suddenly appears. Alexa then shows up, and she tells Kelly that she finally understood that she and Justin belonged together, so she contacted Justin and told him the truth about everything she did and brought him down to meet her. Kelly and Justin sing together and then kiss.

At Brandon’s (Greg Siff) spring break party, Eddie (Brian Dietzen) finally meets his beautiful Internet date, and they kiss, and Brandon hooks up with Cutler (Theresa San-Nicholas), the beach patrolwoman who had been fining him for his spring break activities throughout the film. Kelly and Alexa are also shown to have mended their friendship. 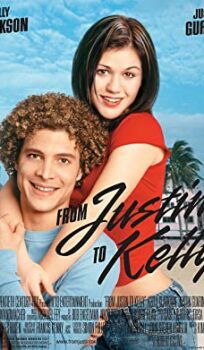