Caroline, the fiancee of James Reece (Jonathan Rhys Meyers) is in actuality a sleeper agent who was sent to spy of him to gain intelligence on an African summit being conducted at his embassy where heads of state will be there. She plans to disguise herself as a delegate and be a suicide bomber.  Reece races to the embassy while Charlie Wax (John Travolta) takes out the terrorist leader that attempts to kill the U.S. Secretary of State.

Reece finds Caroline and tries to talk her down. Reece tells her he doesn’t understand why she is doing this but all he knows that he still loves her.  Caroline seems hesitant as she has fallen for Reece too, but Reece notices her hand reach for the detonator, knowing she is unwilling to compromise her mission. Reece kills her, though it breaks his heart to do so.

Reece sees Wax off, and Wax congratulates Reece for “joining the team.” Wax gives Reece some photos of him and Caroline in happier times so he can remember the good in her and not the bad.  The film ends with Wax and Reece engaging in a game of chess and the ending dialogues suggest that Wax and Reece will continue to be partners. 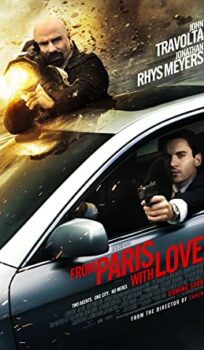