Tatiana Romanova (Daniela Bianchi) believes she is working for the KGB, but her KGB boss Rosa Klebb (Lotte Lenya) is actually working for SPECTRE. Tatiana falls in love with 007 (Sean Connery) and helps him acquire the Lektor decoder. While the two are on a train to Venice, SPECTRE assassin “Red” Grant (a young, blonde, hulking Robert Shaw) drugs Tatania and holds a gun on Bond in their stateroom. When Grant opens up 007’s “Q”-provided briefcase that’s booby-trapped with tear gas, Bond is able to struggle with Grant and uses Grant’s own garrote to strangle him.

As Tatiana and Bond recover in a Venice hotel room, Rosa Klebb, disguised as a maid, tries to kill Bond. Tatiana knocks the gun out of Klebb’s hand and Bond pins Klebb against the wall with a chair as Klebb attempts to kick Bond with the famous shoe with the poison-bladed tip. Tatiana shoots and kills Klebb. 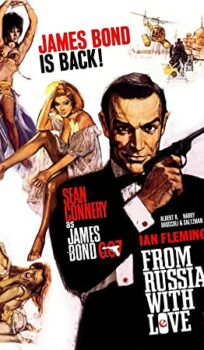