The movie essentially follows the events of the play “Frost/Nixon”, which had its first performance exactly 13 years to the day after Nixon’s death.

As the series of interviews unfolds, Richard Nixon (Frank Langella, a certain Oscar nominee) dominates the discussions with David Frost (Michael Sheen). With the final session a few days away, Frost is despairing since he financed the entire production, doesn’t have the sponsors lined up to recoup his investment and has failed to elicit any significant revelations from Nixon.

Then late one evening, a drunken Nixon calls Frost and spews a diatribe that reveals Nixon has always been driven by the need to prove himself superior to those around him and that Nixon wants to use the interviews to rehabilitate his reputation. Frost is spurred to action and with the help of his assistant James Reston Jr. (Sam Rockwell), uncovers evidence in the transcripts of the taped Oval Office conversations that Nixon discussed with Charles Colson the financing of “the plumbers” months earlier than he had previously publicly admitted to any knowledge of the Watergate break-in.

Frost confronts Nixon with this information at the start of the final session and Nixon finally cracks. In a private moment with aide Jack Brennan (Kevin Bacon), Nixon admits that he’s tired of the years of denial. The ensuing mea culpa as well as the stunning statement, “When the president does it, it’s NOT illegal!”, catapults Frost to fame and ends Nixon’s public life.

Nixon’s legacy is now primarily known for the suffix “-Gate” attached to every Washington scandal. Nixon died of a stroke on April 22, 1994. Five U.S. Presidents attended his funeral. 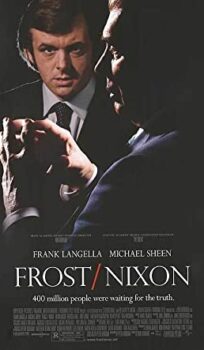