After graduation from boot camp, on the last night, Pvt. Pyle (Vincent D’Onofrio) goes mad, shoots the drill instructor (Lee Ermey), and then turns the gun on himself, very graphically I might add.

The second part of the movie is in Vietnam, when Joker (Matthew Modine) and Rafterman, who had been working as Marine Corps combat correspondents, join Cowboy’s unit.

In the end, A sniper, who turns out to be a teenage girl shoots and kills several members of the unit, including Cowboy.

Eventually, Joker finds the young sniper, but he is out of ammo. Rafterman comes in and blows away the sniper but doesn’t quite kill her. The rest of the unit is deciding what to do with the girl, who is begging them to finish her. Animal Mother (Adam Baldwin), who is now in command after Cowboy’s death wants to leave her to rot, however, Joker shoots her dead.

The last scene is the unit marching while singing the M-I-C-K-E-Y M-O-U-S-E song as Joker narates. 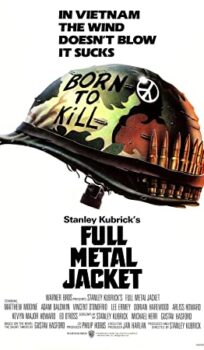