George (Tim Roth), Anna (Naomi Watts), and their son Georgie, are all killed by the two visitors (who go by different names throughout the film).

Georgie is the first to die via gunshot to the head.  George is killed when Anna shoots one of the boys in the chest, only to have the other use the TV remote control to rewind time (a prevalent message throughout the film is that violence in reality is not like in the movies, and while they nod to the fact it is just a movie, everything about it is portrayed as reality) and when she goes for the gun he is aware this time, and to punish her he shoots George on the ground and kills him.

Anna is then taken to the boat where she attempts to cut herself loose with the knife shown earlier in the film, only to have it taken from her as a way to mock the standard Hollywood foreshadowing.  She is then dumped overboard and drowns as the two boys discuss school fiction and state the message of the film quite clearly by stating (in reference to a novel they read) “the family was real, the hero was in fiction”, demonstrating that violence is real and what occurs for entertainment happens in reality, however rising above the odds and becoming a hero only happens in fiction.

And as a note, all of the killing is off screen, this is a pro-reality but anti violence film in its own brutal right. 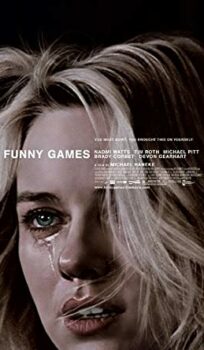