Long Ending:
Owen’s brother Deckard Shaw (Jason Statham), a former British special forces agent, vows to kill all those who sent Owen to the hospital. He breaks into Hobbes’ (Dwayne “The Rock” Johnson) office and discovers the identities of Dominic (Vin Diesel) and his crew. Hobbes and Elena (Elsa Pataky) catch Deckard in the act, but Deckard manages to severely injure the two with a grenade blast. Hobbes is put in a cast and confined to a hospital room (where it is revealed he has a daughter). He contacts Dominic to warn him of Deckard’s pursuit.  The warning comes too late as Deckard kills Han (as shown in the third movie in the franchise).

Brian (Paul Walker, in his final role) is having trouble adjusting to a domestic lifestyle. Mia (Jordana Brewster) tells her brother Dominic she is pregnant again, but says she hasn’t told Brian for fear he will feel shackled to her. Dominic himself is struggling to rebuild his relationship with Letty (Michelle Rodriguez), who still suffers from amnesia. Letty eventually leaves Dominic, claiming she needs to find herself. Deckard sends a mail bomb to Dominic, which destroys his home and almost kills Brian, Mia and their son who were visiting at the time. Mia realizes that Deckard must be stopped for them to live in peace. She goes into hiding with her son after telling Brian he can aid Dominic in tracking down Deckard.

Dominic is contacted by Mr. Nobody (Kurt Russell), who heads a secret spy organization. They agree to assist Dominic in tracking down Deckard if he helps them acquire a kidnapped computer programmer named Ramsey (Nathalie Emmanuel) who developed a program named God’s Eye that can locate any person on the planet in a manner of minutes. She has been kidnapped by a terrorist named Jakande (Djimon Honsou). Dominic pulls together a team including Brian, Roman (Tyrese Gibson) and Tej (Ludacris). To his surprise, Letty shows up and also agrees to join the crew.

They parachute cars onto a mountain road and attack the convoy transferring Ramsey to Jakande’s headquarters. Matters are complicated when Deckard appears to attack them. Brian is also soundly beaten up by Jakande’s enforcer, Kiet (Tony Jaa). Despite these setbacks, the crew ultimately defeat Jakande’s forces, evade Deckard and rescue Ramsey. She tells the group that she sent the God’s Eye program to a friend in Abu Dhabi. The group goes there and after another action scene (which involves Dominic and Brian driving a car in between three skyscrapers in mid-air), they recover the program.

Mr. Nobody and his forces lead Dominic and Brian to Deckard’s hideout while using the God’s Eye program to locate him. They are then ambushed by Jakande and his forces, who have struck an alliance with Deckard. Though Nobody, Dominic and Brian barely escape, Nobody’s men are killed and they loose the God’s Eye program to Jakande. They realize that the villains will now try to kill Ramsey as she alone knows how to deactivate the God’s Eye program. The group decides to set up a final showdown in Los Angeles (which conveniently is, the same city where Hobbes is recovering). Mia also finally tells Brian that she is pregnant with a daughter and he is overjoyed.

In LA, Deckard again goes after Dominic. Jakande rides in a helicopter, using God’s Eye to keep track of Ramsey. He sends in a  drone to hunt her down as Dominic’s crew drives her through the city as she tries to hack the God’s Eye program. Ultimately, Hobbes joins in the fight (after literally breaking free from his cast) and they manage to protect Ramsey long enough to allow her to shut down God’s Eye. Brian faces off with Kiet and this time manages to kill him. Jakande shoots a missile at Dominic (which actually ends up incapacitating Deckard who was fighting Dominic at the time). Dominic launches his car into the air, trying to crash into Jakande’s helicopter. Dominic misses and crashes to the ground. While airborne, however, Dominic managed to throw a bag of grenades he stole from Deckard onto the helicopter and Hobbes shoots them, which blows up the helicopter and Jakande. Dominic appears dead. Letty cries over his body and yells out that she regained her memories during the final battle and remembers that she is Dominic’s wife. She says he needs to come back for her. This works as Dominic is revived and the two embrace.

It is later shown that Deckard survived the missile blast and is thrown into a maximum security prison by Hobbes. The rest of the gang is sitting on a beach watching Brian and Mia play with their son. Dominic realizes that Brian is finally ready to leave the fast and furious life and decides to drive away. Brian catches up to Dominic in his own car and the two express their love for each other while Dominic notes that no matter how far away Brian may be from him, they will always be brothers. The road forks and Dominic and Brian drive down separate paths. A montage of Paul Walker is played and the movie is dedicated to his memory. 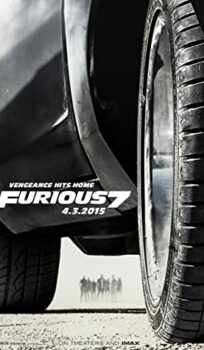