After everyone on Earth falls to internet banking scams, all of Earth comes under control by three aliens known as “the Scammers”. In addition, a tattoo on Fry’s buttocks actually holds the key to time travel.

The Scammers infect Bender with a virus, to make him obedient to anything they want. Using him to travel back in time, they steal every important piece of information ever made in the world. However, since the code on Fry’s butt can only go BACK in time, when each Bender steals something, they simply hide underground where Planet Express will be built hundreds of years later, and walk out of the basement.

While trying to escape being killed by the Scammers, Fry reads the code off of his butt cheek and travels back to 2000, when he was frozen, and lives a normal life.

After 12 years, in 2012, the virus infected Bender finally finds Fry and blows up his apartment. However, Fry is not killed, and because of the explosion, he finds out… he is Lars, who is going to marry Leela in 3000! He returns to the Cryo tube and crawls inside with his original self, freezing both the original Fry and Fry-turned-Lars until 3000.

However, Professor Farnsworth learns that all people that are cloned because of time travel emit “Doomium”, which means that eventually, they’re doomed to explode. When Lars in 3000 realizes this, he cancels the wedding, because he doesn’t want to marry Leela and just explode in a few years.

Bender goes back in time one more time to place the tattoo on Fry’s butt, to prevent a paradox from happening. While in the past, however, he discovers all of the other hundreds of Bender’s that are hiding under Planet Express’ future location, and waits with them. All of the Bender clones emitting Doomium in the same place causes them to all explode (except the real one) and rips a hole in the universe… which does nothing. 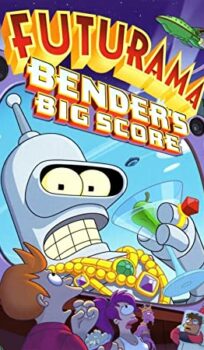