Cubert, Dwight and two other friends convince Bender to play Dungeons & Dragons with them. Bender, however, quickly learns that he was not programmed to have an imagination, and ends up going insane when he finally learns how to imagine things. He begins to believe that he is “Titanius Anglesmith, Fancy Man of Cornwood”, and is sent to a robot mental hospital.

Meanwhile, Dark Matter, which is the universes main fuel source, is skyrocketing in price. Farnsworth determines that Mom is controlling the universes dark matter prices to make a bigger profit.

A flashback begins, and Farnsworth shares with the crew that while he was in a relationship with Mom, it was him who developed the way to turn dark matter into fuel. During the process, two different crystals were made – an anti-matter crystal, and an anti-backwards crystal. If the two crystals are brought within six inches of each other, they will render all dark matter useless as fuel. Mom owns the anti-matter crystal, while Farnsworth has the anti-backwards crystal.

The Planet Express crew decides to stop Mom’s monopoly on the world’s fuel, and breaks into her base. Inside the base, they learn that the only source of dark matter is Niblonian poop, which is being farmed from the hundreds of captive niblonians in Mom’s base.

Just as Farnsworth is going to bring the crystals close enough, Mom gets close enough to snatch it away. To prevent her from getting a hold of it, Farnsworth eats the crystal. However, with the crystals being so close, it causes a resonance in all of the world’s Dark matter, including a large cluster that is inside Bender. This resonance causes everyone to be teleported into an alternate reality comprised of Bender’s imagination.

After a while of traveling through the fantasy world, Mom captures the crystal and everyone is teleported back to the real world. Igner, who has been one of Mom’s minions since the beginning of the series, is revealed to be Farnsworth’s son. Before Farnsworth is to be taken off to have the crystal retrieved from his stomach, he asks if he could hug his son one time.

Mom agrees, and lets Igner and Farnsworth hug. However, both of them start glowing… it turns out that Igner ate the anti-matter crystal, and hugging brought the two crystals within six inches of each other. The crystals disappear, and all dark matter is rendered useless.

As a temporary solution to having no fuel, the Planet Express crew tie all the captured niblonians to their ship and dangle a chicken in front of them, causing them to drag the ship in an attempt to get the chicken. 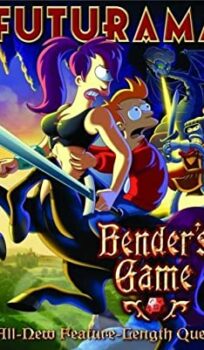