Futurama: Into the Wild Green Yonder(2009)

Fry is successful in stopping the “Dark One”, which ended up being the leech that Leela had been taking care of since roughly five minutes into the movie, just one second before they were set to detonate the Violet Dwarf star.

As the audience that was ready to watch the star explode watches the Dark One being defeated, all of the planets surrounding the Violet Dwarf solar system line up, and fly into the star. All along, the planets were a form of sperm, while the star was an egg. The combined planets and star then evolve quickly into the fabled Encyclopod, who carries a giant dome on his back which preserves all endangered and extinct species.

In recognition of what Fry did to save the Violet Dwarf galaxy, the Encyclopod agrees to copy and save some homosapien DNA. Fry asks “But I thought you only saved endangered species?” The encyclopod pauses for a moment, says “farewell”, and flies off, implying that humans are very close to endangered as well.

Since the Planet Express ship has no weapons, they know that they have no chance to fight Zapp’s ship. However, in front of them is a wormhole. Professor Farnsworth warns the crew that they have no idea where the hole will end, and it could leave them thousands of light-years away with no way home.

The crew unanimously agrees to go through the wormhole anyway. Fry and Leela admit their love for each other, and kiss, right before the Planet Express ship hits the wormhole… and the credits roll. 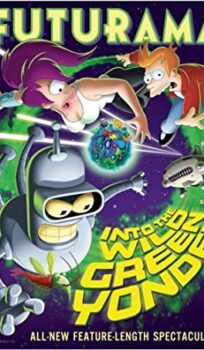