The monsters are all manifestations of the victim’s worst fears, which is why they vanish when the victim dies.  Everyone dies one by one except Ranger (Robert Englund), Cabren (Edward Albert) and Kore (Ray Walston).

At the very end, it is revealed by Kore that the pyramid is some kind of “toy” built by an extinct race to test their children, which he knows because he has been there before;  as it turns out, he is “The Master,” the strange being that sent the crew there in the first place.

Cabren tries to kill him, but it doesn’t work, and he ends up being assaulted by manifestations of his dead crewmates.  After beating them, he returns to Kore, at which point Kore somehow makes him the new Master, and says that if he refuses, his planet will plunge into chaos, although how and why that happens is never explained.  (Incidentally, this all happens while Ranger sits outside, apparently still alive.)  Caben kills Kore and the credits roll. 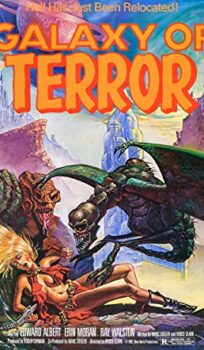