The Omega 13 Device turns out to be a time travel device that allows the entire ship to go back in time 13 seconds.

Mathesar (Enrico Colantoni) will survive his torture, although it will leave him crippled, with a leg brace and a crutch.

Nesmith and “Dr. Lazarus”/Alexander Dane (Alan Rickman) stage a fake fight in the airlock to trick the aliens assigned to shoot them out into space, then they all have a real fight, and then Kwan hits the airlock button and sends the aliens out into vacuum instead.

The Thermians dying of suffocation in the dormitory are rescued in time, but Quellek (Patrick Breen), the one who idolizes “Dr. Lazarus”, gets shot and killed by a bad guy alien out in the hallway.

Nesmith and “Tawny Madison”/Gwen DiMarco (Sigourney Weaver) are guided through the labyrinthine bowels of the ship to find the button to shut down the ship’s engine which Evil Alien General Sarris (Robin Sachs) has set to self-destruct by a small group of fans back on Earth. They can do this because after Nesmith went back to Earth after his initial meeting with the Thermians, they gave him a real “galactic vox” to call them with, and then back at the convention he bumped into one of the fans who dropped his souvenir (toy) “galactic vox”, and they accidentally swapped voxes.

Nesmith, pursued by Sarris and his ship, has the Protector fly through an old interstellar mine field, which results in a whole flock of the magnetic mines trailing after it, which he then cracks-the-whip and throws at Sarris’ ship, which blows up.

Heading for home then, all the Good Guys sitting around on the bridge, “Tech Sergeant Chen” Fred Kwan (Tony Shalhoub) walks in from the elevator, but then reveals himself to be Sarris, who had used one of the Thermians’ matter transformers to shapeshift himself. He pulls a weapon and kills everyone on the bridge. Nesmith, dying, tells Mathesar, also dying, to activate the Omega 13 Device. He does, and the ship is sent back in time 13 seconds, to the beginning of the scene again. But this time Nesmith realizes that it’s really Sarris coming in from the elevator, and he jumps him. The others pull him off, Sarris gets loose, and then Mathesar clocks him with his crutch.

Meanwhile the Protector, after going through the black hole to get back to Earth, has reached dangerously high speeds, and cannot enter Earth’s atmosphere anyway. The Thermians leave in the Protector, the Earthlings get into the shuttle, Laliari (Missi Pyle) chooses to go to Earth with Fred Kwan, and the shuttle is safely guided to a skidding landing in the middle of the Galaxy Quest Convention by the fan geeks using roman candles. Everybody climbs out of the shuttle, including Sarris, who starts to shoot, but Nesmith pulls out a Thermian phaser pistol and vaporizes him, to thunderous applause by the crowd, who think it’s part of the presentation.

The series is renewed, a la Star: Trek The Next Generation.

Watch Sigourney Weaver’s mouth during the “choppers” segment when she and Tim Allen are trying to get to where they can shut down the self-destructing engine. On the sound track, she loudly says “screw”, but her mouth clearly says “f***”. One little F-word would have lost
them their PG rating. 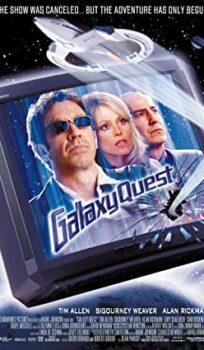