There were two endings to this movie one was the theatrical ending much like the released film it differs from Bruce Lee’s original vision of his quest to bring Jeet Kune Do’s philosophy to the media. The second was pieced together from the documentary: Bruce Lee: A Warrior’s Journey. Which used what remained of the lost unedited footage as well as the edited footage which was closer to Lee’s vision than the infamous film the worldwide audience saw in 1978. Unfortunately Bruce never had the chance to finish his vision due to his untimely death in 1973.

Theatrical Ending:
Movie star Billy Lo (Bruce Lee/Kim Tai Chung/Yuen Biao/Chen Yao Po) was being threatened left and right by a local mafia into joining their syndicate. The Mob lead by Dr. Land (Dean Jagger) try to kill him on his movie sets which “strangely” resemble the set of Fists of Fury and Return of The Dragon.  During the former of the sets filming, one of Land’s operatives, Steiner (Hugh O’Brien) to kill him by posing as one of the extras shooting at Lo. Only he uses a real bullet instead of blanks (hmm where have we heard that story before). Lo gets shot in the face and is taken to a hospital, where he declares himself legally dead. Using a fake body and footage from Bruce Lee’s actual funeral, Lo’s scheme works and he disguises himself. He at first decides to go to Dr. Land’s island home and after a spectacular fight goes to strangle land. However Lo is scared off by Carl Miller (Bob Wall) body guard and full contact karate champion.  Lo decides to kill Miller in his own locker room in another fight scene. Dr. Land finds out about this and sends Steiner to check Lo’s grave only to find a wax dummy in his place. Now that they know Lo’s alive they kidnap his girl Ann Morris (Coleen Camp) and take her to an abandon warehouse guarded by bikers in track suits. Lo finds her and steals one of the suits using the element of surprise he takes down all the bikers. He keeps one alive demanding where Land is, to which he tells Lo that Land is in the Red Pepper Restaurant. Lo breaks into the restaurant and steals a couple of weapons. (The next scene is the first and final time you see Lee that isn’t a stock footage.) Lo first gets into a stick to stick fight with Pasqual (Dan Inosanto) which then escalates into a nunchuck fight. The end result is Lo breaking Pasqual’s neck with the nunchucks. Lo then goes up to another floor where he gets into a Hapkido match with the second henchman (Ji Han Je) which results in Lo back breaking him. On the next floor he fights Hakim (Kareem Abdul Jabarr) to which he breaks his neck. Steiner goes downstairs to check on Hakim only for Lo to kill him too. Lo goes to the top to find Land apparently dead by suicide, only to find out the body was a wax dummy. Lo chases Land on the roof and throws him onto the neon sign killing Land and finally achieving his revenge. As the credits roll by we get a montage of Bruce Lee’s previous film clips.

Lee’s Ending:
Hai Tien (Bruce Lee) a retired martial arts champion, was hired/threatened by Korean underworld gangs to accompany 4 other fighters to scale a pagoda in exchange for the safety of his family. They believed there is some sort of valuable due to the pagoda being guarded heavily by martial artists. There are 5 levels in the pagoda and they are all guarded by a martial artist of different skills. The base of the pagoda was guarded by 50 black belt karate students, which Hai Tien and his allies get through. Not much is said how due to lack of footage, but after going through the base and the first two floors; the remaining group comprises of Hai Tien, Tien (James Tien) and Chieh (Chieh Yuan). The face off against the third floor guardian (Dan Inosanto) who is a master of Filipino martial arts. Chieh gets knocked out by the guardian whilst Tien tries to match his double stick with just one stick. The guardian knocks him down leaving Hai Tien to fight him with a bamboo stick, as the fight goes on Hai Tien bests the guardian while pointing out the guardian’s dependency on rehearsed routines as a flaw. The fight Turns into a nunchuck fight ending with Hai Tien as the victor killing the third floor guardian.  They then face the fourth floor guardian (Ji Han Je) a master of Hapkido. As usual the two allies get beat up whilst Hai Tien fights him. However they take the opportunity to get to the 5th floor. Chieh dies getting thrown down the stairs whilst Tien goes to face off against the man who threw him. The man is the fifth floor gurdian (Kareem Abdul Jabarr) who uses a style similar to Hai Tien. After Hai Tien defeats the fourth floor guardian just in time for him to go upstairs and see Tien die. The fight between Hai Tien and the guardian is difficult as both of them share a similar free flowing style. Hai Tien prevails however due to the guardians eye sensitivity to light and he defeats him. Hai Tien decides not to go to the top floor and walks back down the pagoda exhausted, letting the Koreans know that its all clear. 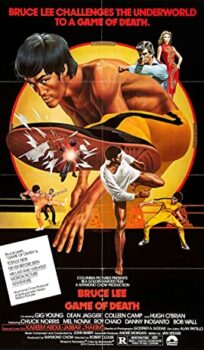