Leah Fuller (Susan Hayward) hires 4 men to rescue her husband, who is trapped in a mine.

As they travel to the mine, the men are all becoming attracted to her leading to tension between them.  They rescue the badly injured husband.

On the return trip, they are attacked by Apaches.  The husband and two of the rescuers die.  Leah, Hooker (Gary Cooper) and Fiske (Richard Widmark) are on the run.  Fiske stays behind to block the Apaches, sacrificing himself, while Hooker and Leah flee.  Fiske is badly injured, but drives the attackers away.

Before dying, Fiske tells Hooker to settle down with Leah.  Hooker says the final line, “If the earth were made of solid gold, I guess men would fight and die for a handful of dirt.” 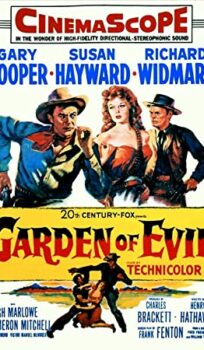