Director Josef (Gore Vidal) committed the murder. The man he killed was stalling the Saturn mission that Josef had wanted to see completed before his death. DNA evidence collected from the body and the knowledge that the mission will go on, makes the director confess.

Before Vincent (Ethan Hawke) leaves to go on the mission Eugene, (Jude Law) shows that he left him enough blood and urine to pass all tests for the rest of his life. Eugene says goodbye to Vincent saying he is going to travel.

Vincent is quizzed by Dr. Lamar (Xander Berkeley) who reveals that he knew Vincent wasn’t Eugene and lets him go on the flight. Dr. Lamar does thisbecause Vincent who weas considered less than human by society has surpassed their limitations while Lamar’s son a supposed perfect being is not what was promised (showing that there are still flaws in the “perfect” system).

As Vincent’s rocket blasts into space, Eugene committs suicide by incinerating himself. 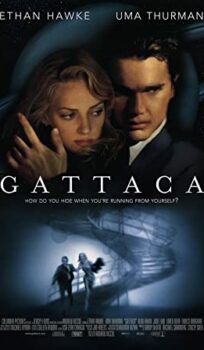