Turns out Piggy (aka Sir Francis Beekman) had stolen the tiara back from Lorelei Lee (Marilyn Monroe). Ernie Malone retrieves Piggy just as he’s about to skip town, and brings him (and the tiara) back to the courtroom, exonerating Lorelei (or rather, Dorothy Shaw (Jane Russell), who is masquerading as Lorelei in court to buy time while Lorelei tries to get money from Gus Eismond so she can buy another tiara to replace the missing one.)

The movie ends happily with a double wedding aboard the cruise ship between Lorelei and Gus and Dorothy and Ernie. While walking down the aisle, the sing “Just two little girls from Littlerock.”

The movie is based on a hilarious book of the same name by Anita Loos. 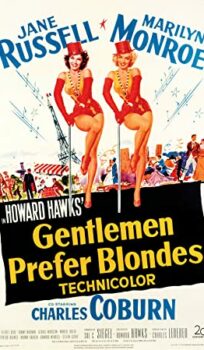