Ursula’s (Leslie Mann) mother Beatrice (Holland Taylor) intimidates George (Brendan Fraser) into understanding that he and Ursula could never be a couple, since she wants Ursula to marry Lyle (Thomas Haden Church). As he is thinking about her words later on, Tookie Bird arrives to tell him how Max (Greg Cruttwell) and Thor (Abraham Benrubi) kidnapped Ape so they could become rich and famous. He gives a sleeping Ursula his good luck charm and heads back to the jungle. The next day, Ursula speaks with her parents, and finds out about her mother’s attempt to scare George off. She realizes she loves George, and tells them so, and then heads off after him.

George enters his treehouse to find it ransacked. Then, Max and Thor arrive with Ape, having went in circles around the jungle and ended up back there. George comically subdues them with some help from Ape and an arriving Ursula. Before Ursula can profess her love to George, Lyle appears. He escaped from jail, joined a cult, and became a ceremonial minister, so he now could marry anyone anywhere. He then has some hired mercenaries seize George while he takes Ursula in the direction of Ape River to force her to marry him. One of George’s monkey pals alerts some gorillas to come help George, and they come and lock the mercenaries in the cage with Max and Thor. George then takes off to Ape River.

As Ursula and Lyle are trying to navigate the rapids in their boat, George makes a huge swing from a great distance to get to Ursula and crashes into yet another tree. The tree falls over and rests above the river, and George grabs Ursula and pulls her out as she passes, which Lyle doesn’t notice. Lyle then goes into a pitch-black cave, and makes official his marriage to someone that he thinks is Ursula, but he soon learns that he accidentally wed a gorilla. George and Ursula profess their love for each other and kiss.

George and Ursula get married, stay in the jungle, and have a son. Ape becomes a Las Vegas performer, with Max and Thor as stage props in his act. 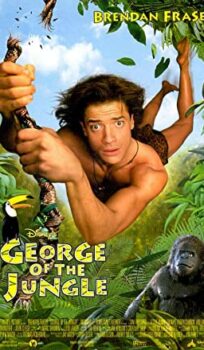