POOPER:
Jessie is able to free herself from the handcuffs by cutting her wrist and peeling away the skin.  She also gets away from The Moonlight Man, but he then appears in her car while she is escaping, causing her to crash.  She survives and he gets away.  Six months later, he is caught and she appears at court on the day of his arraignment.  He tries to intimidate her again, but she tells him she’s no longer afraid of him and walks out.

LONG VERSION:
Gerald and Jessie Burlingame (Bruce Greenwood, Carla Gugino) are at their lakehouse for a romantic getaway in hopes of rekindling their faltering marriage.  Gerald suggests they play a fantasy sex game where she get handcuffed to the headboard of their bed, and she agrees.  After a few minutes, she begins to get uncomfortable and asks to stop, but Gerald refuses.  They get into an argument, which comes to a screeching halt when Gerald suffers a heart attack and dies, falling off the bed.  Jessie begins to scream for help, but since the closest neighbor is half a mile away, nobody hears her.  Since the key to the handcuffs is in the bathroom, it is well out of her reach, as is her cellphone.

Hours later, it’s getting dark and Jessie is becoming weak and tired from trying to get out of the handcuffs.  Earlier, she fed a stray dog a piece of steak but left the front door open.  That dog has now entered the house and goes to the bedroom.  The feral dog takes a bite out of Gerald’s arm, which causes him gets up and cry out in pain.  While Gerald is yelling at her about the failures in their marriage, she sees his dead body still on the floor, so she knows that she is starting to hallucinate.  While Hallucination Gerald continues to yell, Jessie is able to free herself from the handcuffs.  As she begins to gloat to Gerald about her ability to get out of the cuffs, she sees herself still handcuffed to the bed, so now she is hallucinating about herself.  Hallucination Jessie is helping herself (the real Jessie) get through this ordeal, and she reminds her of a glass of water that was left on a shelf above the bed that’s not a hallucination.  She is able to grab it, but cannot get it to reach her mouth.  Hallucination Jessie then reminds her the tag from the newly bought lingerie she is wearing is on the same shelf, and after she gets it, Jessie fashions it into a straw so she can drink.  Meanwhile, the dog is continuing to take bites out of Gerald.

Jessie soon falls asleep, and later wakes up in darkness.  From the moonlight, she sees a tall deformed man in the bedroom holding a box of bones and trinkets.  Gerald reappears and tells her it’s The Moonlight Man.  Jessie thinks it’s another hallucination, but Gerald then shows her a bloody footprint, proving that the person in the room was real.  He also starts to call her Mouse.  This triggers a memory of Jessie’s from when she was 12 years old.  She is at a lakehouse with her father Tom (Henry Thomas), who also called her Mouse.  While watching a solar eclipse, he tells her to sit on his lap.  After she does, he begins to masturbate.  Later, Tom went to his daughter and claims he is ashamed of what he did, and coerces her into not telling anyone what happened.

As a result of that memory, Jessie remembers cutting her hand from a glass she broke when her mother asked her about the eclipse.  Jessie breaks the water glass and cuts her right wrist, then peels away the skin so she can slip out of the handcuff.  Now out of bed, but with her left hand still handcuffed, she drags the bed to the bathroom so she can reach the key and unlock the other cuff.  She bandages herself, but passes out from the blood loss before she can leave.  Once she wakes, The Moonlight Man has returned, and he wants a trinket to add to his collection.  She gives him her wedding ring then runs outside.  She is able to get into the car and drive away, but he is now in the backseat.  She crashes the car, but she survives when neighbors come by to help.  By this time, The Moonlight Man has fled.

Six months later, Jessie has had several skin grafts on her wrist to repair the damage.  She used Gerald’s insurance payout to start a foundation for sexual abuse victims, where she often tells the story of her father.  She also continues to see The Moonlight Man in her dreams, and her wedding ring was never found.  She later learns that The Moonlight Man was caught by police.  His real name is Raymond Andrew Joubert (Carel Struycken), and he is a serial killer suffering from acromegaly (the cause of his deformation).  He is also a graverobber, which is where is got his bones and trinkets.  Since he only targeted men, this is why he never harmed Jessie during her ordeal.  On the day Joubert is being arraigned, Jessie goes to the court.  He tries to intimidate her by mimicking her pose while handcuffed and reciting what she said during that time.  But she just walks up to him, seeing Tom and then Gerald instead of Joubert, and says that he seems smaller than she remembered, which is similar to what she said earlier about her family’s lakehouse.  The movie ends with her walking out of the courtroom and onto the street with sunlight shining down on her. 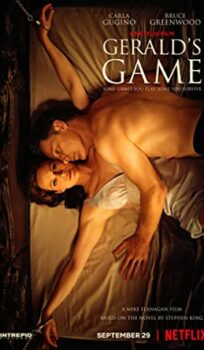