SHORT VERSION:
During the final act of the play on opening night, Berke finally accepts that he is in love with Kelly, so he deviates from the script with his own style of Shakespearean dialogue and respectfully tells Allison – who had wanted to get back together with him after finding out first-hand that Striker was a philanderer – that there won’t be a reconciliation, for his heart now belongs to another. He and Kelly then kiss while the audience applauds.

Striker loudly decries Berke’s actions and gets very upset with the audience for liking it, and blinded by his rage, he accidentally triggers a pyrotechnics explosion that he had planned to harm Berke with, causing him to take the blast instead. He leaves the theater with a burnt face and a bruised ego.

Berke and Kelly happily leave together, talking about their future as well as what they are going to do at tomorrow night’s performance.

LONG VERSION:
While at a party Felix (Colin Hanks) is holding at Berke’s (Ben Foster) house the day before the debut of the play, Berke and Felix notice Striker (Shane West) making an unwelcome pass at Kelly (Kirsten Dunst), so they get in between them. Berke then finds Allison (Melissa Sagemiller) and tries to tell her that Striker has exhibited signs of being a skirt-chaser, but she just storms off, fed up over how desperate he is to get back with her as well as his constant disparaging of Striker. Berke follows her until she enters a room and finds Striker making out with her friend Maggie (Zoe Saldana), and she tells them both to go to hell and walks away while Striker casts Berke an icy stare, believing that he ratted him out to her.

As Berke sits outside afterwards, Kelly comes out to talk to him, and he moans over how he has done everything for Allison and she still thinks of him as a loser, but Kelly says that she just doesn’t get how good of a guy he is. The attraction that has been growing between them throughout the film then hits its peak when they share a kiss, but even though he knows it feels right, Berke soon halts it, saying that they can’t be anything more than friends because she is Felix’s sister. Knowing that this is really due to his unwillingness to get over Allison, Kelly insults him and leaves, and then Felix – having witnessed the kiss and everything after it – punches Berke in the face. Later on, Felix talks to Kelly, and she admits that she is still attracted to Berke even if he is messed up and won’t get Allison off his mind, but he tells her that, even though he isn’t happy about the fact that she fancies his friend, Berke doesn’t deserve her if he can’t see what an amazing person she is. Kelly then opens a gift Berke had given her earlier in the day, which turns out to be a tape recorder, and she plays a message Berke recorded on it saying that she can use this to help with improving Mr. Forrest-Oates’ (Martin Short) poorly written “Pocketful of Dreams” song for the play. He also thanks her for all of her help and says he believes in her. With the assistance of the device, she creates a revision titled “Dream of Me”, and before the play begins the following night, she hands Felix the sheet music for it so he can give it to the orchestra at the right moment.

The play goes smoothly despite a bit of scuffling between Berke and Striker, and at intermission, Allison has a private conversation with Berke where she apologizes for not believing him about Striker and makes overtures of wanting to be his girlfriend again. Meanwhile, Striker approaches the technicians and bribes them to make an early detonation of some pyrotechnics for an effects cue around Berke during the first scene of Act Four, claiming that he just wants to scare him when he actually means to harm him. He informs them that he will raise his sword as their signal to detonate.

Just before the play resumes, Felix gives the sheet music to the orchestra, and as Kelly sings the song beautifully before the first scene of Act Four, Berke is enchanted by her voice and reminisces about all of the wonderful times he has had with her, and he finally accepts that he loves her. As the scene is underway, Berke deviates from the script and improvises his own style of Shakespearean dialogue, and through using their characters in the play, he respectfully tells Allison that there won’t be a reconciliation, for his heart now belongs to another. He and Kelly then kiss while the audience applauds. Striker loudly decries Berke’s actions and gets very upset with the audience for liking it, and blinded by his rage, he raises his sword, so the technicians trigger the pyrotechnics as he is right near them. The explosion blows Striker off the stage and onto a bench in the orchestra pit, causing the accident-prone beauty Dora (Kylie Bax) to be catapulted into the air, but Felix catches her. The play is then brought to an end, but the audience gives the cast a standing ovation, which joyfully surprises Forrest-Oates since he had written off the entire production as doomed almost from the get-go. Berke and Kelly kiss once again, and Dennis (Sisqo) then kisses Kelly’s friend Basin (Mila Kunis), due to them having developed an attraction as well. Striker later leaves the theater with a burnt face and a bruised ego.

Backstage, Felix – who has already felt the sparks fly between him and Dora – finds Berke and tells him that, while he is not exactly thrilled with the idea of his friend dating his sister, he is kind of glad that it is his friend and not some guy he doesn’t know. Berke and Kelly leave the theater talking about their future together as well as what they are going to do at tomorrow night’s performance. 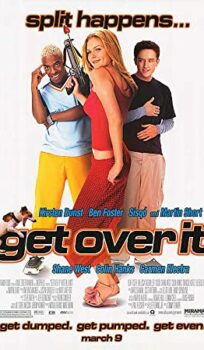