As time passes, the bond between Ray (Ted Danson) and Timmy (Macauley Culkin) grows stronger, and Theresa (Glenne Headly) – an undercover cop who started dating Ray to find out if he and his pals Carl (Gailard Sartain) and Bobby (Saul Rubinek) stole the rare coins – finds herself falling for Ray. Meanwhile, Carl and Bobby follow a treasure map Timmy drew that apparently leads to where he stashed the coins, but what they don’t know is that this search is nothing more than a wild goose chase that Timmy devised so he could enjoy his time with Ray without them hanging around. They end up getting arrested one day after attempting to steal a wine box from a church, thinking that that was where Timmy put the loot, and Bobby comes to think that Ray and Timmy jointly conspired to set up him and Carl so they could have the coins all to themselves. Theresa gets a hold of the map and shows it to her superior, Lt. Romayko (Hector Elizondo), and says that she believes that Timmy drew it and he must know where the coins are. Romayko thus considers Timmy an accessory and says he must be watched as well.

That same day, while Timmy is sitting in Ray’s apartment and watching the home movies he shot of himself, Ray, Carl, and Bobby, he notices Theresa watching them all in the background of one segment, which took place before she had first met him and Ray. After Ray leaves to do an emergency shift at the bakery he works at, Timmy looks out the window and spots the undercover cops Zinn (Ron Canada) and Chapman (Ralph Peduto) staking out the apartment building. Upon seeing Chapman tail Ray and Zinn staying behind to watch for him, he figures out who they are and that they are surveilling Ray because they suspect him of having taken the coins, plus he realizes that Theresa is another cop who is doing likewise. Shortly afterward, Timmy leaves the apartment carrying a full backpack, and though Zinn pursues him for a while, he manages to lose Zinn. We then see him approaching the Neiman-Marcus department store, and later on, we see him putting a gym bag into a locker at the Transbay Transit Terminal. Meanwhile, Ray gets a call at work from Dobbs and finds out that he is back in town and is ready to make a deal on the coins, so Ray schedules a meeting with him for that night.

Ray comes home and asks Timmy where the rare coins are, so Timmy hands him the key to the locker and says that they are in it, but then tells him that he is going back to his aunt’s home. Ray asks why, since Timmy mentioned to Theresa and she, in turn, told him that Timmy wanted to live with him. Timmy explains that, if he goes for the coins, he will never see him again because he will get caught and sent back to prison, and he will cease all communications with him if he does. Ray gets upset with Timmy for trying to force him to choose between him and getting $250,000 and tells him to leave if he wants. Theresa then pays them a visit and asks if she can bring Timmy to the movies (thinking that he might be able to tell her something regarding the coin theft), but Ray informs her that he is about to take Timmy to the transit terminal. Despite Theresa’s attempts to convince them both to change their plans, they drive on over there, and once they go, Carl and Bobby are shown seated in a cab, and they tell the driver to follow them. Theresa heads to the terminal as well and radios Romayko where Ray and Timmy are going, and she adds that she suspects that Timmy has the coins in his suitcase.

Ray buys Timmy’s ticket and he gets him on board his bus, though he is clearly conflicted the whole way through, and as he stands in front of the locker, he struggles with deciding what is more important to him. He ultimately decides that Timmy comes first, so he hurries over to the bus and gets it to stop, then gets on board and tells Timmy that he wants him to stay, and they hug. As they walk by the locker, Ray asks him if they can take just a few of the coins to cover expenses, but Timmy shoots down that idea and tells his father to come along. Suddenly, they get confronted by Bobby, who pulls out a gun and orders Ray to open the locker and give him the bag (Carl backed out of joining Bobby in confronting Ray in this manner just moments ago, having disagreed with it). Ray does so, but then the police show up and arrest him and Bobby, and Carl simply walks away and goes on with his life (the police don’t bother with him because he wasn’t one of their suspects). As Ray is being led out, he sees Theresa nearby wearing her badge and realizes that she is a cop as well, and she apologizes to him for deceiving him.

The cops check the bag and discover that it contains nothing but pennies, and a search of Timmy’s suitcase, as well as Ray’s car and apartment, also yields nothing. Theresa interrogates Timmy on what he knows about the theft, but he refuses to rat out his father, instead assuring her that whoever stole the coins is sorry that they did so and they will never steal anything ever again. He then proceeds to give Theresa some hints on where the coins actually are, and she is able to deduce that he hid them inside a gym bag identical to the one the pennies were in on a mannequin in Neiman-Marcus, based partially on her, Ray, and Timmy having visited the store once before and Timmy and Ray pointed out that the bag the mannequin was holding looked a lot like Ray’s. She finds the coins and brings them to Romayko, and he rewards her by taking her off probation and making her a full-fledged police officer.

Ray and Timmy are released, and they encounter Theresa as they are making their way out. Timmy suggests that they all go out for dinner tonight, but even though it is clear that Ray and Theresa want to continue seeing each other, Ray tells Timmy that he and Theresa must wait for a while before they can go on another date, given that she is a cop and he is an ex-con that she just arrested. After they get outside, Ray asks Timmy why he didn’t tell him earlier that the police were watching him, and Timmy replies that, if he did know about them, he would’ve tried to outsmart them whenever he went to get the coins and gotten caught. Therefore, when no one was looking, he took the gym bag with the coins in it and switched it with the one on the mannequin and put the mannequin’s bag in the locker. Ray points out that he still allowed him to open the locker and get arrested, but Timmy tells him that that was just meant to serve as a teachable moment for him. They then decide to go play some basketball. 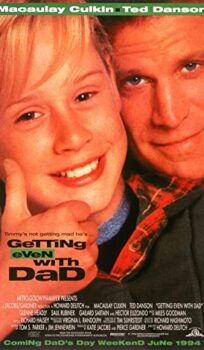