Dr. Frederick Cleveland meets one of his students Wayne Brooks, to dig in the mountains of South America.  Cleveland’s daughter, Janet,  and Wayne fall for each other.  Wayne has found an extinct 500 year old lizard encased in stone.  When the stone broke and the lizard came out, it came back to life.  They are digging for evidence of an old spanish expedition led by a man called Vargas the Giant (played by professional boxer Buddy Baer).  Lightning hits the stone around the giant, and he too comes out alive.

The giant kills some people, but the local police blame Wayne.  Wayne is arrested.  The giant kidnaps Janet.   Cleveland frees Wayne to rescue Janet.  The police follow.  They see Wayne battling the giant, and realize Wayne is innocent.  The giant escapes into the mountains.  The police, archeologists and townspeople pursue the incredibly slow moving giant.

Local teenager Charlie, whose girlfriend was killed by the giant, goes after the giant alone.   Although the giant had super strength in defeating various groups of men, Charlie alone beats up the giant and throws the giant to his death over a waterfall. 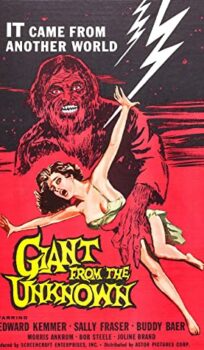