A sprawling western with Rock Hudson, Elizabeth Taylor, Dennis Hopper and James Dean (one of his only 3 starring movie roles).

Texas cattle baron Bick Benedict (Rock Hudson) brings beautiful Leslie (Elizabeth Taylor) back from the east coast to be his wife. Life on their remote immense cattle ranch is a big adjustment for her. Bick’s sister Luz had been the only woman of the house, and Luz resents Leslie’s presence. Luz dies and leaves her small portion of the ranch land to Jett Rink (James Dean), a low-life hired hand. Jett is clearly smitten with Leslie, and is inappropriately friendly with her. The land he gets is thought to be worth little, and Bick wants to buy it to keep the ranch intact.

Then comes the Texas oil boom. There is oil on Jett’s land. Jett becomes very wealthy and builds a huge oil company. Jett and Bick hate each other and have many confrontations.

Bick and Leslie have conflicts with their three children. Bick wants their son Jordan (Dennis Hopper) to follow his footsteps on the ranch, but Jordan wants to be a doctor. Worse, in Bick’s eyes, Jordan secretly marries a Mexican girl. Daughter Judy wants to go to “a man’s college” rather than finishing school. Worst of all, daughter Luz becomes romantically involved with Jett Rink (35 years older than her and her father’s enemy). Jett’s company opens a huge hotel. There is a big parade and banquet that Jett throws in his own honor.

The conflict between Jett and the Benedicts comes to a head at the banquet. Jett has Jordan and his wife thrown out because he will not allow Mexicans in his hotel. Bick and Leslie storm out dragging Luz along. Luz decides to leave her family to go to Jett. The banquet is over, and a drunken Jett is alone in the ballroom. He is very drunk and talking to himself aloud, and does not realize Luz is there. He admits he still loves Leslie, and is only after Luz to get close to Leslie. Leslie leaves him at that point.

As the family is driving home, they stop at a diner. While they are seated, a Mexican family enters and is thrown out by the owner of the diner. Bick confronts the owner, and defends the family. This demonstration that Bick has overcome his prejudice wins his family back to him. 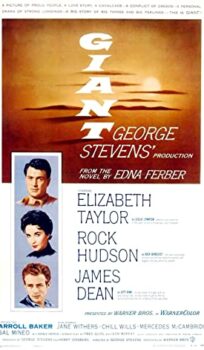