Gaston (Louis Jordan) sees Gigi (Leslie Caron) as a child, but when she blossoms as a young lady Gaston is confused.  He realizes he attracted to the new grown up Gigi and tries to offer for her as his mistress.  At first she refuses him  but after pressure from her aunts who have been mistresses in their heyday she caves and accepts him.  After taking her out on the town and realizing what kind of future awaits her if she becomes his mistress, he takes her home and asks for her hand in marriage.  Happy ending! Maurice Chevalier sings Thank Heaven for Little Girls! 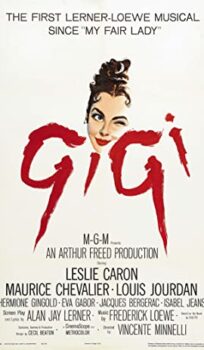