Mundson (George Macready) didn’t commit suicide; he’s been hiding out. Just as Gilda (Rita Hayworth) and Johnny (Glenn Ford) reconcile their differences and start making plans for a future back in the States, Mundson shows up, intending to murder them. As he advances on the couple, Uncle Pio (Steven Geray) stabs him from behind. Police Captain Delgado (Gerald Mohr), mulling over how difficult it is for a man to die twice, says he’ll ignore the whole incident in exchange for the contents of Mundson’s safe. 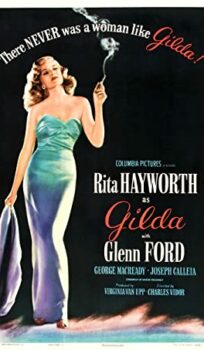