POOPER:
Diana defeats Adrian in the amateur featherweight finals and becomes champion. Despite his displeasure over having fought a girl and having lost the fight, Adrian’s love for Diana has not diminished, and the two continue their relationship.

LONG VERSION:
While attending a birthday party for Hector (Jaime Tirelli), Diana (Michelle Rodriguez) spots Adrian (Santiago Douglas) showing up with Karina (Belqui Ortiz), the girl that he said that he wasn’t really serious with, and sees them spooning a little. After they make brief eye contact with each other, a hurt Diana leaves. The next day at the gym, Hector puts Diana and Adrian in a sparring match with each other, and while they are in a tie-up, Diana tells Adrian she loves him. Much later, Adrian talks to Diana, where he expresses how awful he feels for hurting her and tells her that he has ended it with Karina permanently. She forgives him, and they kiss.

As Diana is having her first amateur fight, her father Sandro (Paul Calderon) shows up, thinking that her brother Tiny (Ray Santiago) was boxing that night. He sees her in the ring, and after watching her take some abuse, he can’t stand to see any more and leaves. When she gets home, he finds him drunk, and he tells her that she looked like a loser in that ring. Finally fed up with his surliness, she goads him into a fight and then beats him up and starts strangling him, in the process revealing that he had physically abused her mother, which was what drove her to commit suicide. Tiny then appears and begs Diana to stop her attack, so she does. Soon after, she lodges with Hector and his wife.

Diana gets matched up against Adrian in the amateur featherweight finals, which drives another rift between them because Adrian doesn’t like to fight girls. In the fight, Diana manages to floor Adrian when she gets an opening, which helps in her gaining the victory by unanimous decision and becoming champion. However, Adrian verbally makes it known to her how displeased he is over this fight, and she cries in the dressing room afterwards.

Some time later, they meet up at Hector’s gym and talk. Adrian tells her that he felt that boxing and going pro with it would be his ticket out of his impoverished neighborhood, and he felt that giving her the chance to floor him not only hindered this dream, but caused her to lose respect for him. She says he hasn’t lost her respect, because he fought her like he would any other guy. She asks if he sees what that means, and he replies, “That life with you is war.” She tells him “maybe life’s just war, period.” They kiss and hug soon after. 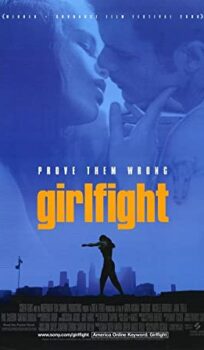