SHORT VERSION:
Janey and Jeff defeat Natalie and her partner Ben in the finals of the Dance TV contest to become the show’s new regulars. When Natalie tries to complain to her father about the result, he puts his foot down for once and tells her to shut up. Janey sees her father off-camera, who had initially come down to the studio to try to stop her, but he lets her know that he is very proud of her performance. Lynne then shows up as the new Miss Dance TV, having gotten the job after the previous one quit before the show started.

LONG VERSION:
As Janey (Sarah Jessica Parker) and Jeff (Lee Montgomery) rehearse for the finals of the Dance TV contest together, they end up falling in love. However, Janey’s wealthy rival Natalie (Holly Gagnier) – who is also in the finals and wants to win at any cost – convinces her father J.P. (Morgan Woodward) to better her chances of winning, so he confronts Jeff two days before the finals and tells him that, since he owns the factory where his father (Biff Yeager) works, he will fire him if Natalie doesn’t win. Not wanting to see his father lose his job, Jeff meets up with Janey the next day and tells her that he’s quitting, and when she presses him for the reason why, he says some hurtful things to her instead and leaves. That night, when Janey tries to sneak back into her home through her bedroom window, she discovers too late that her father Robert (Ed Lauter) had set up a burglar alarm on the window, so she is subsequently caught and grounded.

The next morning, Jeff eventually tells his father about what J.P. had told him. His father asks him if he can win, and when Jeff says yes, he tells him to go win the contest and let him worry about J.P. Jeff’s sister Maggie (Shannen Doherty) goes up to Janey’s brother Zach (Ian Giatti) and tells him to tell Janey that Jeff will be dancing now, and he delivers the message. Janey starts to wonder how she can sneak out to make the show, and Zach suggests that she “call for reinforcements.” To that end, Janey contacts Lynne (Helen Hunt) for help, and that night, she sabotages the burglar alarm and then successfully sneaks out with Lynne’s assistance. They get down to the studio, and Janey meets up with Jeff just seconds before Dance TV goes on the air.  As the show is underway, Janey’s family tunes into the contest on their TV set, and after seeing Janey amongst the contestants, Robert gets angry and heads straight to the studio to get her.

Janey and Jeff end up tying with Natalie and her partner Ben (Steve LaChance) for first place, meaning that they must now have a dance-off to determine the winner. As the teams are taking their back-and-forth turns, Robert shows up, but he is told by Drew (Jonathan Silverman) to just watch Janey dance, and he gets noticeably more proud of her the longer he watches. After Natalie ends her dance believing she’s won, Janey says to Jeff “Let’s do it”, and they proceed to cap off their dance with a spectacular series of synchronized gymnastics that she taught him. When the judges deliberate again, they name Janey and Jeff the winners and the new Dance TV regulars.

Janey finally notices Robert and thinks she’s in trouble, but he makes it known to her that he is very proud of her. Natalie berates Ben for losing the contest, but when she tries to complain to her father about it, he puts his foot down for once and tells her to shut up. Lynne also shows up as the new Miss Dance TV, having gotten the job after the previous one quit before the show started. 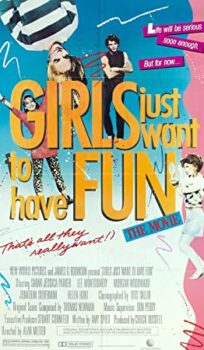