Submitted by Evan B (Long) and Curt (Pooper)

LONGER VERSION:
The film opens in ancient Germanic territories. The conquering Roman legion is commanded by beloved general Maximus (Russell Crowe), who vanquishes the remaining Germanic forces. His victory is observed by the aged emperor Marcus Aurelius (Richard Harris), who loves Maximus like a son. That night, Marcus Aurelius’ children Commodus (Jaoquin Phoenix) and Lucilla (Connie Nielsen) join Marcus Aurelius for the victory party before returning to Rome. It is revealed that Commodus expects to be announced as the next emperor of Rome, while Lucilla used to date the now-married Maximus. Marcus Aurelius calls Maximus to him and confides that he intends to name Maximus emperor of Rome and wants Maximus to transition Rome into a republic. Maximus states that he only wishes to return home to his wife and son, but will do as Marcus Aurelius asks. Commodus overhears this conversation and subsequently murders his father (crying as he does so) and arranges for Maximus’ murder. Maximus is wounded but not killed in the assassination attack. Meanwhile, Commodus claims his father died of natural causes but named him emperor just before he died.

Maximus manages to return home to find that Commodus’ assassins killed his wife and son. He passes out and is found by slave traders. They capture and sell him as a gladiator to a man named Proximo (Oliver Reed – in his last role). Maximus is a reckless and successful gladiator, whose brutality wins over the crowd. Proximo promises that if Maximus tones down his behavior, he can get Maximus to Rome to fight in the Colosseum. Realizing that he can have his vengeance if successful, Maximus begins fighting with honor. He also begins organizing his fellow gladiators as he did his legion, leading his squad to impressive victories while suffering few fatalities. He befriends fellow gladiators Hagen (Ralf Moeller) and Juba (Djimon Hounsou). Maximus admits to Juba that he wishes to die to be reunited with his family in the afterlife. Juba wishes to be freed so that he may return to his family. Eventually, Proximo’s band of gladiators are called to Rome to participate in games being held in Commodus’ honor.

Meanwhile, we see that Commodus is planning to overthrow the Roman Senate and install himself as a true emperor. He is also grooming Lucilla’s son Lucius (Spencer Treat Clark) as his heir. Commodus has romantic affections for Lucilla, who rebuffs his advances. She also is sympathetic towards the Senate and tempers Commodus’ plans to overthrow it.

Maximus (wearing a helmet) and his crew gain favor with the Roman crowds by overcoming huge odds to win their first battle. The skill of the gladiators especially intrigues Lucius. Commodus descends to the Coliseum floor to greet the gladiators where it is revealed that Maximus is their leader. Commodus is shaken but realizes he cannot kill Maximus without angering the spectators crowd. Instead, he puts Maximus and his crew up against increasingly difficult challenges, all of which Maximus’ squad overcomes. In victory, Maximus continues to defy Commodus’ authority and he becomes a symbol of resistance to the Emperor’s power. One night, Lucilla visits Maximus and asks him to work with the Senate to overthrow her brother. Maximus rebuffs her, angry that she let Commodus rise to the throne. Later, Lucilla appears reluctantly willing to succumb to her brother’s advances, but Commodus shows rare restraint before things get too far. Lucilla realizes that Commodus must be stopped as after this encounter, he grows ever more erratic and powerful.

Eventually, Commodus is approached by one of his loyal servants from his military days. The servant informs him that his legion is still loyal and would march on Rome to help him depose Commodus. With encouragement from Juba, Maximus contacts Lucilla and agrees to help her overthrow her brother (and the two patch things up in general, though Lucilla realizes Maximus’ heart will always be with his deceased wife). Proximo initially resists Maximus’ plans but eventually vows to help him escape and rejoin his legion. Commodus soon learns of Maximus’ escape plans. The night of Maximus’ escape, Commodus’ forces invade Proximo’s compound. Maximus escapes, but many of his comrades are killed, including Hagen and Proximo. Maximus reunites with his servant but learns too late that Commodus’ forces are lying in wait to ambush Maximus at the rendezvous point. Maximus’ servant is killed and Maximus is captured. The Senator who orchestrated the event is captured and sentenced to death. Meanwhile, Commodus orders Lucilla to “love him as he loves her” and that if she commits suicide, he will kill Lucius. Lucilla weeps, knowing she will have no choice moving forward but to submit to Commodus’ will.

The next day, Commodus arranges to personally fight Maximus in the Coliseum. Prior to their battle, Commodus visits Maximus and stabs him in the back to weaken him. Commodus hovers near death when he is brought out to the Colosseum. The two fight and though Commodus lands several blows, Maximus’ skill eventually allows him to disarm Commodus. None of Commodus’ guards will lend Commodus a new sword, so he attacks Maximus with his hidden dagger. With the crowd behind him, Maximus takes control of the battle and forces Commodus to fatally stab himself. Maximus then collapses and with his dying breath, swears allegiance to the Republic of Rome. He sees his family waiting to welcome him into the afterlife.

Lucilla runs down to the Colosseum floor and embraces Maximus’ body. She then orders the imprisoned Senators released and charges them with building a better Rome. Lucilla also frees Juba and the rest of Maximus’ gladiatorial comrades. Commodus’ own guards carry Maximus’ body out of the Colosseum to be honored, while Commodus’ body is left to rot on the floor. The film ends with Juba honoring Maximus’ memory before returning home to reunite with his family. 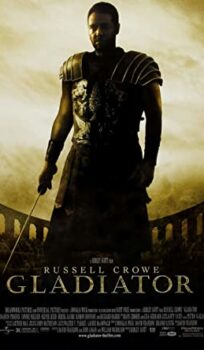