SHORT VERSION:
Jack, Rob, Dennis, Mickey, and Slosh ultimately decide against staying at El Rancho Grande for another year, having mutually accepted that they need to move on with their lives. However, in order to preserve their memories of the house and prevent others from despoiling it, they demolish most of the interior. Before they do so, Mickey chats with Chelsea and finally professes his feelings for her, and she returns his affections.

The next day, Dennis heads off to Michigan to do a master’s business program at Michigan State University, and Rob moves to Los Angeles with his girlfriend Joanie. Mickey moves into a new place with Chelsea since they still have a year of college left to do, and Slosh takes the El Rancho Grande sign and moves in with a group of freshmen that he earlier befriended, and they hang the sign on the front of their house. Jack leaves town to go stay with his brother and ponder his next move, but as he is making his way out, he finds his ex-girlfriend Dina dining in a restaurant with her new boyfriend. After her boyfriend excuses himself to use the washroom, Jack gets her attention from outside and writes “angst for the memories” on the window with a black marker as a goodbye message to her. He then gets back in his truck and resumes his departure.

LONG VERSION:
At the commencement ceremony following Jack’s (Ben Affleck), Rob’s (Sam Rockwell), and Dennis’ (French Stewart) graduation, Rob meets the mother of his girlfriend Joanie (Megan Ward), which he had been dreading, but he ends up getting along with her very well. Jack gets into an argument with his parents about his future, since they were never happy with how he pursued an art degree because they believe that there is no future in art, and they leave abruptly. Later on, while Jack is hanging out with Mickey (Vinnie DeRamus), he encourages Mickey to stop being so timid and pursue Chelsea (Alyssa Milano) because he knows that they like each other a lot.

That afternoon, Jack, Rob, Mickey, and Slosh (Vien Hong) accompany Dennis to the art faculty luncheon that he was invited to by his professor, Luther (John Rhys-Davies), ostensibly to talk more about an apprenticeship that Luther earlier offered him. Dennis soon gets to chatting privately with Luther, and he finds out that what Jack perceived about Luther’s interest in him is true: The only reason Luther is offering him the apprenticeship is because he has a homosexual attraction to him. He rejects both Luther’s advances and his job offer, and after discussing this unfortunate turn of events with Jack, Jack – having never liked Luther at all – decides to stick it to Luther by taking a chainsaw from a nearby wood pile and cutting down the totem pole created by his sculpture students. Jack, Dennis, and their other friends then flee.

When the quintet goes to a beach bonfire party that night, Jack’s mood is soured when he finds that his ex-girlfriend Dina (Kristin Bauer) and her new boyfriend are among the attendees. He and Slosh get to drinking and talking alone, and Slosh confesses to him that his carefree attitude about life was fostered thanks to him. He explains to Jack that he admired the way he always did what he wanted, and that rubbed off on him and ultimately resulted in him choosing to drop out of college. He has no regrets whatsoever, though, because now he doesn’t fear what the future holds for him. He then tells Jack to go and talk to Dina and let the chips fall where they may. Jack decides to act on his suggestion and has a private chat with her (despite it being preceded by a scuffle that he has with her boyfriend), where he tells her that he wants to give their relationship another chance and explains why he wants to do this. Unfortunately for him, she turns him down, telling him that she has recognized that he is not looking to restart their relationship out of any love for her, but because he is having difficulty dealing with the changes happening in his life now that he is out of college and he is just looking to her as a security blanket. She then returns to her boyfriend.

After that, Jack and company return to El Rancho Grande, and they bring Chelsea along with them since she was at the party. Mickey has a chat with Chelsea up in his room, during which he finally admits his feelings for her, and he kisses her on the cheek. He then hears smashing sounds coming from outside, so he looks and sees that the guys are breaking random objects in the back yard. When he comes down to investigate the matter, Jack and the others explain to him that they have decided against staying at El Rancho for another year, having mutually agreed that they must move on with their lives. However, they have decided to destroy all of the stuff in the house in order to preserve their memories of the place and prevent others from despoiling it. Accepting their decision, Mickey goes inside and starts to smash a few things in the kitchen, and after the gang comes in and watches him do this, they work themselves into a frenzy and demolish everything in sight. They then have one last drink at the bar they constructed before tearing that apart as well.

The next morning, Dennis takes down the El Rancho sign in front of the house, and Slosh decides to keep it. Dennis then departs for Michigan to do a master’s business program at Michigan State University, having been accepted there, and Rob moves to Los Angeles with Joanie. Mickey and Chelsea begin dating and move into a place together, since they still have a year of college left to do, and Slosh moves in with a group of freshmen that he earlier befriended, and they put up the El Rancho sign on the front of their house. Jack leaves town to go stay with his brother and ponder his next move (where he narrates that he still keeps in touch with the gang), but as he is making his way out, he spots Dina’s boyfriend’s car parked outside of a restaurant. He parks his truck in front of it, then gets out a black marker and walks up to one of the windows, where he sees Dina dining with her boyfriend. After her boyfriend excuses himself to use the washroom, Jack gets her attention and proceeds to write “angst for the memories” on the window with the marker as a goodbye message to her. He then returns to his truck and resumes his departure. 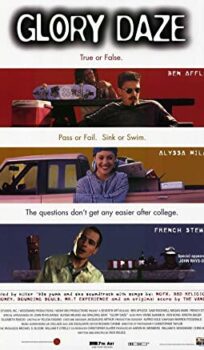