Pooper:
Friendless manages to successfully herd all the cattle to the slaughterhouse and saves the day. As a reward, the ranch owner allows Friendless to keep Brown Eyes.

Long Ending:
The movie opens on a man named Friendless (Buster Keaton) who, as his name implies, has no friends. Even dogs don’t want to be pet by him. He is destitute and loses his house and all of his belongings. Friendless journeys to the city to find a job, but is overwhelmed by and ignored in all the hustle and bustle. He sees a train headed out west and decides to hop onto it to make his fortune. He also manages to find a small 2-inch snub nose pistol that he takes with him.

Friendless  accidentally falls out of the train into the desert. He wanders  to a nearby ranch where he manages to steal a cowboy outfit. Friendless approaches the ranch owner (Howard Truesdale) and manages to talk his way into getting a job on the ranch. Friendless is awful at his job, having never worked on a ranch or with cattle. He does manage to remove a rock from a female cow’s hoof. The cow later saves Friendless when a bull charges him after seeing his red handkerchief. The pair form a close bond and he calls the cow Brown Eyes.

The ranch owner prepares to send 1,000 head of cattle to Los Angeles for sale to a slaughterhouse. Some of the cowboys disagree with the decision, wanting to wait until the prices rise. The owner ignores them and also decides to sell Brown Eyes to the slaughterhouse. Friendless tries to raise enough money to buy her freedom, but fails to do so. The owner’s daughter (Kathleen Myers) takes pity on Friendless, but also can’t raise the money to save Brown Eyes from slaughter. Nonetheless, Friendless sticks with the rancher and helps load his cows onto the LA-bound train.

During transport, the train is attacked by the cowboys who opposed the rancher’s decision to sell. During the gunfight, one of the cowboys sets the train in motion without a conductor, intending for the train to crash and kill all the cows. The rancher will lose everything if his herd doesn’t make it to the slaughterhouse. Friendless manages to get onto the runaway train and bring it safely into the LA station. He then unloads all 1,000 cows, who begin to wreak havoc throughout LA.

In order to draw the cattle’s attention to him, Friendless dons a bright-red devil suit. and begins waving his body in front of the herd. They all charge him and a long chase ensues through the city. Ultimately, Brown Eyes lets Friendless ride on her back and they trick the remaining steer into the slaughterhouse pens. The rancher thanks Friendless for saving his cattle and the ranch and promises him a full-time job and anything else he may want. Friendless states that “he just wants her” and the rancher worries he is referring to his daughter. It is soon revealed that Brown Eyes is the “her” that Friendless was referring to, much to the daughter’s relief. The rancher, daughter, Friendless, and Brown Eyes all load into the rancher’s car and happily drive back to the ranch. 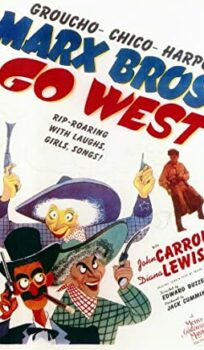