Short version:
Godzilla defeats King Ghidorah, killing him. All the other monsters bow down to Godzilla, accepting him as the new Alpha and stopping their rampage.

Longer Version:
Monarch is keeping watch over seventeen different titan creatures, most of whom are in hibernation. One of their scientists, Emma Russell, is working on an “Orca” device which can to some degree control the creatures. When eco terrorists attack the base she is on, she and her daughter Madison are kidnapped. Her estranged husband works with Monarch to try and stop the terrorists, who are using her device to release the monsters.

Emma turns out to be working with the terrorists. She believes that Humanity is a plague on the Earth, and that by releasing the creatures gradually, one at a time, they can cull mankind’s overpopulation. Also the creatures cause nature to grow at a hyper-accelerated rate, so their presence will ultimately regenerate the Earth. She helps the terrorists release King Ghidorah, who fights Godzilla.

In an attempt to destroy the monsters the military launches a new weapon, the Oxygen destroyer. This apparently kills Godzilla, but King Ghidorah survives. He goes on to call all the other creatures, waking them all simultaneously. They go on a rampage, causing catastrophic damage throughout the world and threatening to destroy humanity.

Monarch discovers that Godzilla is not dead, but resting and regenerating in a radioactive hot spot underground. However the process could take years, too late to help humanity. So Monarch deliver a nuclear weapon to supercharge Godzilla with radioactivity, helping him recover. Doctor Serizawa personally plants the nuke, telling Godzilla “Goodbye… old friend” before detonating it.

In Detroit Madison escapes the terrorists with the Orca device and activates it. All the monsters head for the city, including the recovered Godzilla. Godzilla and Mothra engage in a huge battle with Ghidora and Rodan. Godzilla ultimately triumphs, releasing huge energy blasts which kill Ghidorah as Mothra kills Rodan. The other monsters arrive and bow down to Godzilla, accepting him as their alpha leader – the King of the Monsters. Godzilla bellows triumphantly and the movie ends. 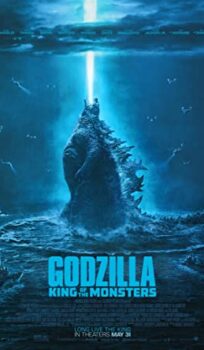