Five years after defeating King Ghidorah, Godzilla reappears to attack a facility operated by Apex Cybernetics, a company meant to help humanity rebuild from the titan destruction. Apex CEO Walter Simmons (Demián Bichir) recruits former Monarch scientist Nathan Lind (Alexander Skarsgård) to lead them to an energy source in the fabled Hollow Earth to use against Godzilla. Nathan goes to Ilene Andrews (Rebecca Hall), a Monarch researcher who has been studying Kong for a decade, to convince her to use Kong to guide them to the energy source. Kong has also developed a friendship with a deaf Iwi native girl named Jia, who communicates with Kong via sign language.

On the way to the energy source, Godzilla attacks the convoy and fights Kong for the first time. He nearly drags the great ape underwater until the crew intervenes and scares Godzilla off temporarily, tricking him into thinking he has won. They locate Hollow Earth and find Kong’s ancestral home, where his family truly ruled like kings. He even finds an axe made from dorsal spines like those found on Godzilla. Walter’s daughter Maya attempts to extract a sample of the energy source just as Godzilla also locates the source and attacks using his fire breath. Kong fights off monsters in Hollow Earth and kills Maya and her crew when they attack him. Kong engages in Round 2 with Godzilla and nearly beats him down with his axe, but Godzilla once again overpowers Kong but spares him.

Meanwhile, Madison Russell (Millie Bobby Brown) gets her friend Josh to find former Apex employee Bernie Hayes, as they know Apex is behind whatever is setting off Godzilla. They come across their facility and find that Apex is using one of Ghidorah’s skulls to control MechaGodzilla, which Walter wants to use to assert humanity’s dominance over the titans. It backfires when Ghidorah’s consciousness takes over, and MechaGodzilla comes to life without the link. It kills Walter and makes its way into Hong Kong where it fights Godzilla and almost kills him. Nathan helps revive Kong, who is convinced to help Godzilla by Jia. Godzilla and Kong team up, using the blue flame/battle axe combo to tear MechaGodzilla to pieces. Godzilla and Kong acknowledge each other as worthy opponents before Godzilla goes back to the ocean.

Kong makes Hollow Earth his new home, with Nathan, Ilene, and Jia still keeping an eye on him. 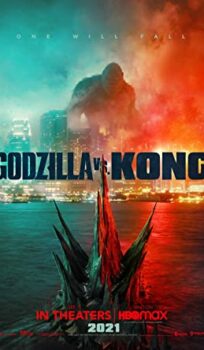