Nick (Matthew Broderick) figures out that Godzilla reproduces asexually, that he probably has already laid eggs, and that the fish he had been collecting was to feed his young. However, before any action can be taken, Nick is kicked out of the American military’s research group due to his ex-girlfriend Audrey (Maria Pitillo) taking top secret information about Godzilla from him and using it for a news report to get a news anchor job (which would be ultimately stolen from her by her obnoxious boss and news anchor Charles Caiman [Harry Shearer]) and the report being broadcast on TV. Audrey tries to apologize to Nick, but he doesn’t care, and heads for the airport to leave New York.

However, the cab driver takes him to the docks and not the airport, and it is revealed that the driver is the French insurance salesman. He introduces himself as Phillippe Roche (Jean Reno) and that he was with the French Secret Service. He takes Nick to the FSS warehouse headquarters on the docks, where he tells Nick that he was trying to find Godzilla and its nest and destroy both because he was told by the French government to “clean up the mess” from the nuclear tests in French Polynesia that borne Godzilla. Nick ends up joining them in their cause, and they all head for one of the tunnels Godzilla dug to go to and from the nest. Audrey and her friend and news cameraman Animal (Hank Azaria) head for the same tunnel so Audrey can make up for her mistake to Nick by finding the nest as well.

The U.S. Army and Navy attack Godzilla, and the Navy seemingly kills him by taking him out with two torpedoes as he was trying to dig his way under Manhattan in the water to escape. Nick, the FSS, Audrey, and Animal find out that the nest is in Madison Square Garden, with over 200 eggs strewn about. They eggs begin hatching, and the young start to attack the people because they smelled like the fish that were left for them to eat. Nick, Phillippe, Audrey & Animal eventually become the only ones left. After failures by Nick & Philippe to make phone & radio contact with the outside to send a bomber to blow up the building, Audrey decides to send a live news report through the building’s newsroom, and the report and the images of the young reach the U.S. military. A bomber is sent, and the quad escape the Garden before the bombs connect and destroy the Garden and the young Godzillas. Audrey and Nick rekindle their romance outside.

However, Godzilla shows up, still alive, and angry over the death of its young begins to chase the four, who soon steal a cab, throughout Manhattan. While the four pass a U.S. military blockade, Nick takes the cab driver I.D. and leaves it for the military to get, and the military contact Nick on the cab’s radio through it. They are told to lure Godzilla out into the open so they can get a clear shot at him, so they manage to get him to chase them to the Brooklyn Bridge, where he is caught in the suspension cables. The bombers then fatally wound Godzilla, and he collapses on the ground and dies.

Audrey meets up with Charles Caiman and tells him that she was quitting the news company for his selfish act. Animal notices the videotape in his camera is gone, and at that moment Phillippe (who ducked out of sight earlier on) calls Nick up on his cell phone to tell him that he would send the tape back after removing a few things from it, and thanked him for his help.

It last shows a view of the inside of the obliterated Madison Square Garden, where one egg is found unharmed. It hatches, and the young Godzilla lets out a roar. 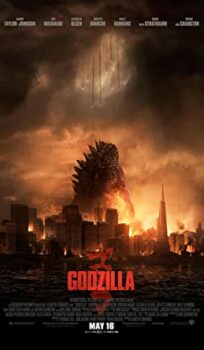