SHORT VERSION:
Joe, Willie, and Albert pull off the bank robbery and escape with $2.3 million, and they ultimately get away with the crime. Later on, Joe finds out from Jesus – the man who instructed him and his friends on how to rob a bank and who laundered the money for them – that he was the leader of the masked robbers who pulled off the heist in the same bank at the beginning of the film. After he reveals this to Joe, he explains that he spoke in a fake Caucasian voice and had his distinctive neck tattoo drawn on with henna ink in order to throw the authorities off his trail.

The men keep enough money to cover their lost pensions and secretly give away the rest to their fellow members of the Knights of Hudson lodge as well as their old co-workers at Wechsler Steel who also got shafted by the company, in addition to giving a $10,000 tip to Mitzi, their favorite waitress at their favorite diner. Joe gets his granddaughter Brooklyn the puppy he promised to get her for making the honor roll at school, and he also helps her father Murphy step up and become a better father to her (which he started doing before the heist, largely so Brooklyn would still have a male parental figure in her life in case if the heist went wrong and he got put in prison). Albert donates one of his kidneys to Willie, saving his life, and Willie starts seeing his daughter and granddaughter more often.

The film ends with Albert marrying his girlfriend Annie some months later, and he, Joe, and Willie chat in private afterward and toast each other to their good fortune.

LONG VERSION:
Joe (Michael Caine), Willie (Morgan Freeman), and Albert (Alan Arkin) decide to conduct their holdup of the Williamsburg Savings Bank on the same day that they will be working the charity carnival hosted by the Knights of Hudson lodge that they are members of, intending to have the carnival serve as their alibi. In the days leading up to the heist, Joe helps Murphy (Peter Serafinowicz) – the father of his granddaughter Brooklyn (Joey King) – work on becoming a better father to Brooklyn, mainly so she will still have a male parental figure in her life in the event that the heist goes awry and he ends up in prison.

Joe, Willie, and Albert sneak away from the carnival shortly after 2:00 p.m. in rather ingenious ways, with Willie taking one of the carnival’s shuttle buses to use as a getaway vehicle, and after pulling up outside the bank a half-hour later, they put on masks and arm themselves with handguns loaded with blanks so that no one will get hurt. They walk in and execute their heist, but while it is in progress, Willie deviates from the plan by going over to calm a scared young girl who is there with her mother, which gives one of the tellers a chance to trigger the silent alarm. Willie then suffers a sudden bout of pain brought on by his failing kidney (which he has never told Joe or Albert about) and kneels on the floor, and after the young girl yells out that he needs help, Albert quickly walks toward Willie to check on him. Joe stops Albert by telling him that he will handle it, and then the young girl lifts up the lower half of Willie’s mask to help him breathe, exposing his jaw and mouth. When he pats her on the leg in gratitude, she takes notice of his new wristwatch, which has a picture of his granddaughter on the face of it. The guys manage to complete the robbery and get away on the bus with $2.3 million just before the police show up, and Willie tells the others that what he suffered was just a panic attack.

When the trio get far enough away from the bank, Joe, and Albert separate from Willie and go their own ways, with Joe visiting Jesus (John Ortiz) – the man who taught them how to pull off a bank robbery – to give him the money so he can launder it for them and claim his share, and Albert going into Wechsler Steel and melting down the masks and handguns, having gained access to the building using a keycard provided by one of the current workers who was informed about the heist by him and the others. Willie arrives back at the carnival with the bus at around 3:00 p.m. to solidify his alibi, and Joe and Albert return shortly afterward to do the same. The trio later celebrate pulling off the robbery by having a fancy dinner, but as they walk back home, Willie is overcome by a much stronger bout of bad kidney-induced pain. He is taken to a hospital, and there, Joe and Albert find out about Willie’s kidney problem from one of the doctors. What’s worse, they also learn that he is in full renal failure and will die unless he gets a transplant.

A squad of FBI agents – led by Agent Hamer (Matt Dillon), who led the investigation into the first bank robbery at the start of the film that Joe was on hand to witness and inspired him to do his own heist – are brought in to assist the police in investigating this new holdup. Footage from one of the surveillance cameras shows that the bottom half of Willie’s face was made visible to it when the little girl pulled his mask up. When a TV news report airs footage from another one of the cameras showing the odd way that Albert walked toward Willie, this attracts the attention of Keith (Kenan Thompson), the manager of a Value Town store that Joe, Willie, and Albert once attempted to steal food from in a “practice theft” a few weeks earlier. Keith summons Hamer to his store and tells him about what the trio tried to do there, then shows him footage from the security camera of the way that Albert walked in the store and says that it looks far too similar to how the bank robber walked. After the FBI compares that footage with the recording from the bank’s camera, they and the police find Joe and Albert and place them under arrest, and two FBI agents pay Willie a visit in his hospital room.

Hamer interrogates Joe and Albert individually while Willie is questioned by the agents, and all three men stick to their alibis. However, Hamer informs Joe that the robbers made a mistake, then he has him, and Albert take a ride with him back to the hospital where Willie is being treated; where they are put in a lineup in the hospital’s gymnasium alongside Willie and several other seniors. Afterward, the same mother and daughter that Willie interacted with come into the gym, and Hamer instructs the child to check out the men to see if she can identify the one whose mask she partially removed. She gets to Willie last, and though she recognizes his wristwatch, she surprisingly covers for him by telling Hamer that she doesn’t see the guy here, leaving Hamer with no case.

Joe is next seen meeting with Jesus at his favorite diner, and Jesus has brought along a pug puppy in a pet carrier, since Joe had promised Brooklyn that he would get her a puppy if she made the honor roll at school. As they chat, Joe asks Jesus if he took his share of the money, and Jesus replies that he abstained from doing that out of respect for him and his friends. He then says in a Caucasian voice that it is a culture’s duty to take care of its elderly, and this helps Joe realize that Jesus was the leader of the masked robbers who committed the first bank heist since the leader said those very words to him after refusing to take his wallet when he offered it. Jesus explains that, in order to throw the authorities off his trail, he put on that fake voice and had his distinctive neck tattoo (which Joe saw and provided a description of to Hamer) drawn on with henna ink. Hamer then suddenly shows up to return Joe’s wallet to him since he left it behind at the evidence department, and as he makes small talk with Joe and Jesus, he notices the puppy and kneels down to check it out. We soon see that Jesus attached the $2.3 million to the roof of the carrier, but thankfully, Hamer fails to notice it before the pug bites his finger when he tries to touch it, and he gets back to his feet to deal with the blood coming out of the wound.

Shortly after Joe, Jesus, and Hamer leave the diner, we see that Joe secretly left a $10,000 tip on behalf of himself, Willie, and Albert to their favorite waitress Mitzi (Siobhan Fallon Hogan). The trio also anonymously drop off a box at the Knights of Hudson’s meeting place that contains two pies sitting on top of a large amount of money, along with a note telling them that they all deserve “a piece of the pie”. As for the rest of the cash, the three friends keep enough to cover their lost pensions and divvy out whatever is left to their old co-workers at Wechsler. Albert also donates one of his kidneys to Willie, saving his life, and Willie starts seeing his daughter and granddaughter more often.

The movie ends with Albert marrying his girlfriend Annie (Ann-Margret) some months later with their friends and their friends’ families in attendance. Later on, Joe, Willie, and Albert have a chat in private and toast each other to their good fortune. 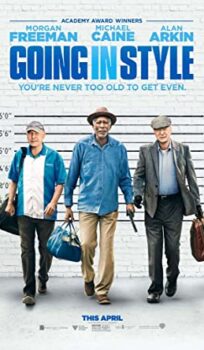