Joe (George Burns), Al (Art Carney), and Willie (Lee Strasberg) are three senior citizens who spend each day sitting on a park bench feeding pigeons and dealing with annoying kids.  One day Joe decides to do something to break the monotony:  rob a bank.  Even though none of them have a criminal history, the idea of a robbery brings them some excitement in their lives, something they haven’t had in a long time.  Al takes some guns and ammo from his nephew Pete’s collection and, disguised in “Groucho” glasses, the trio successfully rob a bank of over $35,000.  However, the excitement of the robbery is too much for Willie, who suffers a fatal heart attack later that day.

At his funeral, Joe and Al decide to give $25,000 of the money to Pete and his family so he can start a business, and blow the rest of it on a trip to Las Vegas.  After a huge success at the craps table, Joe and Al head home after just one night.  While Al is taking a nap, Joe hears on the radio that the police are about to make an arrest in the robbery.  Joe goes to wake Al to tell him the news, but the excitement of the trip was too much for Al, who died in his sleep.  That night, Joe goes to Pete and gives him their Las Vegas winnings (over $70,000) and comes clean about them pulling off the bank job.  He also tells Pete to hide the money in a safe deposit box and not to tell anyone about it, including his wife, because the police will just take that as well and claim that it was part of the robbery.

While on the way to Al’s funeral, Joe is arrested by the FBI.  Despite the chance to get off scott-free by just telling them where the money is hidden, Joe refuses to tell them.  Some time later, Pete visits Joe in prison and asks him why he doesn’t just tell them.  Joe says that his life is actually better in prison because he now gets three meals a day and is treated with respect by the others, something he hasn’t had in a long time.

The movie ends with Joe being escorted back to his cell with these parting words to Pete, “Besides, no tin-horn joint like this can ever hold me.” 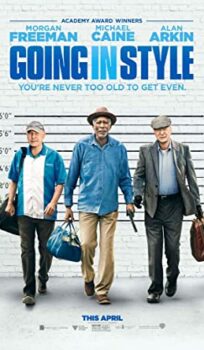