Father O’Malley (Bing Crosby) wins over Father Fitzgibbon (Barry Fitzgerald) and rehabilitates the boys’ gang, teaching them to sing and turning them into a boys choir.

He writes a song (“Going My Way”) that earns big money for the church. The church burns down, but they rebuild it.

He sends to Ireland for Father Fitzgibbon’s 90-year-old mother, who comes to visit.

Aspiring singer Carol James (Jean Heather) marries the banker’s son (James Brown), he enlists in the Air Force, goes off to war, and is invalided home. His father the banker (Gene Lockhart) does not foreclose on the church’s mortgage.

Father O’Malley is transferred to another ailing parish across town, and Father Tim (Frank McHugh) is appointed as Father Fitzgibbon’s new assistant.

Rise Stevens sings, in addition to a full orchestra Metropolitan Opera version of “Going My Way”, the Habanera from “Carmen” and part of Schubert’s “Ave Maria” 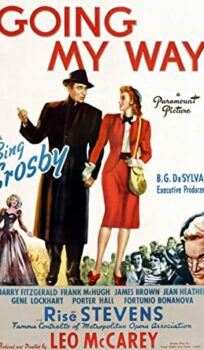