SHORT VERSION:
Randall shows up to the container ship at Pier 14 with the 50th car, the Shelby GT 500 (a car that he has a negative history with), 12 minutes past the 8:00 a.m. deadline and with damage done to it due to having a wild chase across town with the police, specifically Detectives Castlebeck and Drycoff. He is told to go see Calitri at his salvage yard, so he does, and Calitri refuses to accept the car and orders his henchmen to shred it and kill Randall (Atley lied to Calitri by saying that Kip has evaded him, so Calitri decided that he would settle for Randall if Kip could not be found). Thankfully, Kip rescues Randall before he can be bumped off, being motivated to save him after having earlier been informed by Atley that the reason Randall left his auto theft crew six years ago was that their mother requested that he do so, hoping that it would prevent Kip from following in Randall’s footsteps.

Randall storms up to Calitri in his office and starts beating him up, but Calitri pulls out a gun and starts shooting at him, forcing Randall to retreat to the upper floors of the building, and the shots attract the attention of an arriving Castlebeck and Drycoff. Calitri winds up confronting Castlebeck, but before he can kill him, Randall appears and kicks Calitri over a railing, sending him falling through the roof of his office far below and crashing on top of the very coffin he had made for Kip, killing him on impact. Out of gratitude for saving him and knowing that he only committed the thefts to save his brother, Castlebeck lets Randall go free. Before he departs, Randall lets Castlebeck know about the container ship with the stolen cars on it.

As Randall, his crew, and Atley are having a celebratory barbecue at Otto’s garage, Kip gifts a dilapidated Shelby to Randall for saving him and for the sacrifices he made to try to keep him from becoming a carjacker. However, when Randall decides to take it out for a spin with Sara, it breaks down just as they exit the lot.

LONG VERSION:
Randall (Nicolas Cage) and his crew succeed in stealing the bulk of the 50 cars Calitri (Christopher Eccleston) needs despite some hiccups, bringing each one they jack down to the container ship at Pier 14 as instructed, and Randall rekindles his old flame with Sara (Angelina Jolie) in the midst of the heists. However, as they come closer to completing their task, Detective Castlebeck (Delroy Lindo) gets a report from the crime lab saying that the glass he found in the warehouse that was earlier seized from Kip (Giovanni Ribisi) and his gang belongs to a broken blacklight lamp bulb. He soon has an epiphany about it, so he has Detective Drycoff (Timothy Olyphant) return with him to the warehouse with a couple of blacklight rods, and they scan the walls with them until they find the “shopping list” of the cars written on one of the walls in ultraviolet-sensitive paint. After Drycoff remarks that there are too many cars to track, Castlebeck decides that they and some other cops will just focus on the rarest ones, and he and Drycoff will specifically concentrate on the 1967 Shelby GT 500, knowing that Randall will save it for last because he is afraid of it (for that car is the one car that he was never able to successfully steal, due to the fact that something would always go wrong whenever he tried).

As Kip, Toby (William Lee Scott), and Tumbler (Scott Caan) are stealing the 49th car from an upscale neighborhood, security is called on them, and Toby gets shot in the left arm by one of the guards just before they escape the neighborhood. They drive back to the pier to meet the rest of the crew rather than take him to the hospital (given that they are driving a stolen car and the doctors would ask questions about his gunshot), and after Kip reports to the others what happened, Atley (Will Patton) – a guy who works for Calitri but is friends with Randall and Kip – decides to take Toby to a private doctor he knows of, and Kip goes along with them. With the 49th car now secured, Sara drives Randall over to the International Towers in Long Beach to steal the Shelby. After he gets it, he discovers that Castlebeck and Drycoff are in his path leading to one of the streets, so he thus drives down a different road and leads them – as well as the backup they call for – on a high-speed chase all through the city. Randall’s escape is brought to a halt when he reaches the Vincent Thomas Bridge and gets held up in traffic due to a car accident there, but after seeing Castlebeck, Drycoff, and a slew of officers in his rear-view mirror and knowing that his time is almost up, Randall uses the ramp of a flatbed tow truck to make a risky jump over the accident site, and he just manages to land on the other side and continue on his way. While this all happens, Kip and Atley sit in the doctor’s waiting room while Toby is getting treated, and Atley remarks to Kip that he is going to have to get him out of town, fearing that Randall will not succeed. Kip remarks that he is not going to abandon his friends like how he believes Randall abandoned both him and his auto theft crew six years ago, prompting Atley to enlighten him to the truth on the matter: Kip’s and Randall’s mother told Randall to leave both of those things behind, knowing that, if he had stayed, Kip would’ve inevitably joined his operation. Randall did as his mother requested since he cared for Kip as well, but those sacrifices clearly wound up all being for naught since he still became a carjacker.

Once the 8:00 a.m. deadline arrives and Randall still hasn’t arrived with the Shelby, Calitri calls Atley and orders him to bring Kip to him so he can be killed. Atley lies and says that Kip has evaded him, so Calitri tells him to find him, and if he can’t, then Randall will be the one who gets eliminated. After Atley hangs up, he lets Kip know that Randall has just taken his place on the chopping block. 12 minutes later, Randall arrives at the pier, but he is told by one of Calitri’s men that he is too late, and if he has a problem with that, then he can take it up with Calitri. Randall thus pays a visit to Calitri in his nearby salvage yard, who also states that he is late, and he is unsatisfied at the shape the Shelby is in since it sustained damage during the chase. Randall tries to negotiate an $80,000 deduction from his $200,000 payment in order to cover the cost of the damages, and Calitri says that he accepts, but then immediately reneges on it by hitting Randall with some brass knuckles. He then orders his henchmen present to kill Randall and shred the car. As this happens, Castlebeck asks Drycoff where Calitri’s salvage yard is, and after Drycoff tells him the address, they immediately drive on over there.

Just as one of the thugs is about to put a bullet in Randall’s brain, Atley shows up wanting to talk to them, but it turns out to all be just a distraction; the yard’s hydraulic grappling claw comes swinging in and wallops them, and Randall looks at the cab and finds Kip operating it. Randall orders Atley to get Kip out of here, then he marches into Calitri’s office, finds him in his private woodshop, and starts a fight with him. Calitri gets hold of a handgun and starts shooting at him, attracting the attention of an arriving Castlebeck and Drycoff. Randall retreats to the upper floors of the building while avoiding Calitri’s shots until he manages to get out of his sight, but then Calitri spots Castlebeck and shoots at him twice, and the second shot punches a hole in a steam pipe right next to Castlebeck and scalds his shooting hand, making him drop his handgun. Calitri then confronts him and sticks his gun in his face, but before he can pull the trigger, Randall charges in and kicks him over a nearby railing, sending him plummeting through the roof of his office and crashing onto the very coffin he had built for Kip, and he is killed on impact. Castlebeck tells Randall that he is now in the middle of a moral dilemma; while he would like to take him in for that wild chase they just had, he knows that the reason he did what he did was to save his brother’s life, plus he saved his life just now. When he asks Randall what he thinks he ought to do, Randall replies that it is his call, so Castlebeck tells him that he is free to go and he will stay and clean up this crime scene. Before leaving, Randall tells Castlebeck about the container ship that has all the stolen cars on it.

Randall, his crew, and Atley have a celebratory barbecue back at Otto’s (Robert Duvall) garage, and Kip comes before Randall and gives him a dilapidated Shelby GT 500 as a gift, having bought it for him as a token of appreciation for saving him and for the sacrifices he made for him six years ago. Otto promises to restore it to tip-top condition, and Randall hugs Kip and also gives Atley his thanks for trying to keep Kip safe. Randall gets the car started up and has Sara join him in taking it out for a spin, but the car breaks down just as soon as they exit the lot. 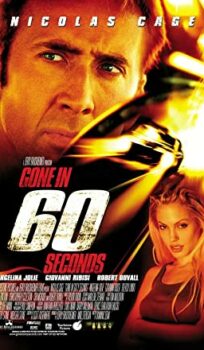