A.A. Milne (Domhnall Gleeson) is a writer living in London with his wife Daphne de Sélincourt (Margot Robbie), a happy-go-lucky socialite. He is called up for military duty when World War I begins. Although he survives the conflict, he returns home traumatised, prone to panic attacks and a deep hatred towards the concept of war. Daphne gives birth to a son afterwards, however she had wanted a daughter (as a girl would not be enlisted if another war breaks out) and this combined with a difficult labour which almost kills her causes Daphne to stay emotionally distant from her child. The boy is named Christopher Robin, but it is decided he will be informally known as Billy (played by Will Tilston as a child and Alex Lawther as a young man). A nanny by the name of Olive (Kelly MacDonald) is hired to take care of Billy as Daphne is not really fully interested in her son while Milne intends to write an anti-war book. However he finds it difficult to concentrate and no longer likes London as the hustle and bustle reminds him of the war, so he uproots his family and moves them to a house in the country.

Although the move was intended to allow him to write, Milne still struggles and takes weeks to unpack his office. Already angry from having to move, a frustrated Daphne decides to return to London herself declaring her intention not to return until Milne has started writing. Olive also has to leave, as her mother falls ill (and later dies, delaying her return) much to a five-year old Billy’s distress. Milne is now forced to take an active role in raising his son, and although he finds it difficult at first (in part due to his post-war trauma) the two start to bond and take walk through the woods outside. The two make up stories as they go, and also start to play with Billy’s toys which have all been named one of which is a yellow bear called Edward. On a trip to London to visit his mother, Billy also visits London Zoo and meets a bear called Winnie (short for Winnipeg). Billy asks his father to write a story for him, and Milne is inspired by his recent experiences with his son to write a poem about a boy called Christopher Robin and his animal friends (Billy’s bear is later renamed Winnie the Pooh, the Pooh coming from his nickname for a local swan). The poem gets a lot of attention, and Daphne returns now her husband is writing again. Olive also returns, and Milne gets together with an illustrator and decides to write a book of poems about Christopher Robin and his friends.

The book, When We Were Very Young, is a huge success and Milne and his wife are kept away from home for long periods as they do press tours leaving Olive to look after Billy nearly all the time. More books follow, and as Milne’s fame increases so does the public’s interest in the real-life Christopher Robin. Billy is therefore also whisked away and forced to do countless publicity appearances, and although he doesn’t enjoy them he respects his parents wishes. On his birthday, Billy hopes his parents will come home however they instead send a brass band to play for him and Milne later phones his son, however the call is part of a radio interview with Milne calling his son ‘Christopher Robin’, something he had never done before and which upsets the boy. Olive meets a man and decides to get married, angering Milne and infuriating Daphne. Olive reluctantly decides to leave her job for good, breaking both hers and BIlly’s hearts. Milne realises just how much he was overexposed his son and decides to not write anything else about Christopher Robin or Winnie the Pooh.

Billy is sent to boarding school, where he is bullied relentlessly throughout his education since everyone knows he is Christopher Robin. When he leaves years later, World War II has broken out and while many young men are drafted Billy is not as he fails the medical. Billy is now very bitter towards both his parents for how they exploited his childhood for profit, telling his father that he wanted a story written for him, not about him and now he’s had a miserable life because everyone knows who he is. Billy asks his father to use his influence to allow him to join the Army anyway, and although Milne doesn’t want to he feels his owes his son after everything that happened. A still resentful Billy leaves, much to his parents’ distress, and later a telegram is received telling them Billy is missing and presumed dead.

Milne is grief-stricken, and finally understands how much he took from his son. Billy survives however and returns home to his parents and also reunites with Olive who lives nearby. He later tells his father while on a walk that the people he served with were fans of WInnie the Pooh and how the poems made them happy. Billy then forgives his father for what happened and the two return home, as Milne reminises about taking the same walk when his son was a young child.

Captions at the end explain that AA Milne eventually wrote his anti-war book. Billy (who remained close with Olive for the rest of her life and didn’t touch a penny of the royalties from the Pooh books) went on to own a bookshop and came to be known as Christopher to his friends. The stuffed toys that inspired the books ended up going on display in the New York Public Library. In reality, although Christopher eventually came to terms with his childhood fame he remained estranged from his parents. Although he did somewhat reconcile with his father after the elder Milne fell ill, he did not talk to his mother for the last fifteen years of her life (their already strained relationship made worse when she disapproved of his choice of wife) and she even refused to see him on her deathbed. 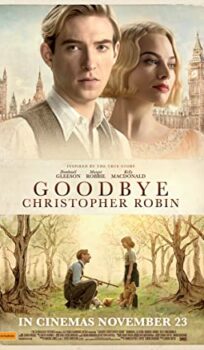