The movie is based on the book “Goon: The True Story of an Unlikely Journey into Minor League Hockey.”

Doug Glatt (Seann William Scott) is made for fighting.  He beats up a rowdy hockey player going after his friend (Jay Baruchel), who hosts Hot Ice TV.  The hockey coach gives him a chance to play defense.  Once Doug makes a name for himself – Doug ‘The Thug’ Glatt #69.  His coach suggests he move to his brother’s, Ronnie Hortense (Kim Coates), hockey team in Halifax to bring back their team spirit.

Doug bunks with Xavier Laflamme (Marc-André Grondin) who was a star goaler until Ross Rhea (Liev Schreiber) put him in the hospital.  Doug meets Eva (Alison Pill) and falls in love, but Eva has a boyfriend, Richard (David Lawrence).  Eva eventually breaks up with her boyfriend.

Doug turns the team around with his innocent small-town charm and love of hockey.  Doug’s parents, Dad (Eugene Levy) and Mrs. Glatt (Ellen David), aren’t so happy with this new profession.  They would have liked to see him go into the Jewish family business of doctoring like his gay brother, Ira (David Paetkau).

Eventually, Doug’s team gets to play Ross’ team.  This will be Ross’ last kick at the playoff can, so a big fight is expected.  Ross and Doug get into their epic fight (which is where the blood and tooth come in from the opening scene).  Ross beats Doug pretty good to the point of breaking his ankle.  Doug gets one last chance and clocks Ross, so they both fall over in victory.  Doug sits out the rest of the game with Eva by his side.  Xavier sees Doug’s dedication and wins the game for the team to go onto the playoffs. 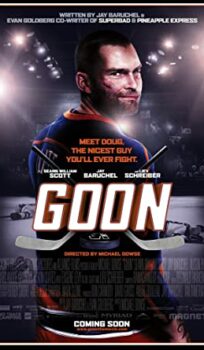