SHORT VERSION:
At the close of the nationwide telecast/country music show put on in Branson, Missouri to help Gordy find his family, Cousin Jake gets a phone call from a viewer informing him that he delivered a family of pigs from Meadowbrook Farm up to the fattening yards in Broken Bow some time ago, and most of the pigs that go there get sent to a slaughterhouse in Omaha. Sipes’ lackey Brinks takes a confidential file out of his briefcase that has the information on the slaughterhouse inside it just as Jessica tells Hanky that she remembers her late father once telling her that their family owned a processing plant in Omaha. Sipes lies and tells Jessica that no such plant exists, but Jake notices the confidential file and takes it and gives it to Jessica, and she finds the plant listed inside. Sipes snatches the file back and again tries to get them to pay no attention to it, but Luke, Jake, and Jessica confront him for hiding this. This sparks a brief fight between Sipes and Luke that ends with Jessica smashing Brinks’ briefcase over Sipes’ head and Luke hitting him with a knockout punch.

Gordy and all of his human friends then get into a limousine and drive off to the slaughterhouse, and on the way there, Hanky manages to call the night supervisor at the plant and get it shut down right away. When they arrive, Gordy finds that his mother and siblings are still alive and reunites with them, and as a bonus, he finds that his father was saved just in time, too.

A short time later, Jessica and Hanky purchase Meadowbrook Farm, and they and Luke and his family bring Gordy and his folks back to it. Through Hanky, Gordy invites all of them to stay on the farm, saying that there is nothing better than a happy family. They all agree to, and Luke and Jessica share their first kiss. The movie ends with Gordy’s human friends enjoying their new lives on the farm, and Gordy himself is content.

LONG VERSION:
As Hanky (Michael Roescher) is out in the countryside helping Gordy locate his family, they cross paths with Jinnie Sue (Kristy Young), Luke (Doug Stone), and Cousin Jake (Tom Lester), and they bring them both into their motorhome. However, the trio soon discovers that Hanky is considered a missing person when they hear a news broadcast over the radio about his disappearance, and they decide to head to St. Louis to deliver him back to his mother, Jessica (Deborah Hobart). Unfortunately, they also overhear on the same broadcast that Hanky’s grandfather Henry (Ted Manson) has just been hospitalized after suffering a heart attack, and due to him already dealing with a pre-existing heart condition, he is not expected to live.

The following day, Henry dies, and during the hearing of his will in the boardroom at Royce Industries’ headquarters, it is revealed that he has named Hanky as the heir to his company. However, Henry has also stipulated in the will that, because Hanky is a minor and must wait until he comes of age to come into his inheritance, his entire fortune will be left in the care of Gordy. Just as the scheming Sipes (James Donadio) challenges the will, Jinnie Sue, Luke, and Jake enter with Hanky and Gordy. Jessica thanks Luke for bringing her son home and kisses him on the cheek, hinting at the attraction that has been slowly growing between them. In private, Sipes speaks with his lackeys Dietz (John Kohler), Krugman (Afemo Omilami), and Brinks (Tom Key), and he chews out the former two over their failure to carry out his order to kill Gordy. He then states that he is going to marry Jessica as planned, and he brings up how, if anything happens to Gordy, she will be next in line to manage Hanky’s inheritance, implying that he will make another attempt on Gordy’s life when the opportunity presents itself.

Hanky and Gordy make some sweeping changes to Royce Industries, primarily in getting it to switch to selling more natural and healthier foods. When Brinks first delivers these orders to Sipes, Sipes points out that he didn’t inform Hanky about the sausage factory in Omaha that his family owns, and Brinks replies that he kept that from him because he figured it might upset him to know that he inherited such a factory. Sipes thus tells him that they will keep Hanky in the dark about that. In a short period of time, the changes Hanky and Gordy have made results in a big financial windfall for Royce Industries, and it also increases Gordy’s celebrity status even further. One day, Jake calls Hanky and Gordy from Branson, Missouri, and he requests that Gordy make a personal appearance at a big country music show being held there so he, Jinnie Sue, and Luke can get on the bill as a support band. Hanky replies that they can’t come because Gordy has to search for his family, and Jake replies that he explained that to the show’s organizers, and the Branson Chamber of Commerce was subsequently contacted and they want to turn the show into a nationwide telecast to help Gordy make an appeal to find his family. Hanky and Gordy thus agree to come. Unfortunately, Sipes and his cohorts were (somehow) able to capture this conversation on tape, and after listening to it, Sipes senses that his chance to finally do away with Gordy has arrived, since he and Hanky will be away from everyone at Royce Industries and in an unfamiliar place.

While the telecast is in progress, Dietz and Krugman snatch Gordy when he is alone and tie him up inside a sack and leave, but Jake sees them doing this from afar and pursues them. Jake loses sight of the goons while following them through a wooded area, and Dietz and Krugman stop at a bridge over a river, intending to throw Gordy into it and drown him. Thankfully, Jake pulls up at the river’s edge and sees them throw the sack over, and he catches Gordy while Dietz and Krugman drive off unaware that they were unsuccessful. As Hanky is sitting with Jessica, Luke, Jinnie Sue, Sipes, and Brinks and moping over Gordy’s disappearance after the show has ended (Sipes had told him that Gordy simply ran away), Jake shows up with Gordy and hands him over to Hanky. Jake then gets a call from a viewer saying that he believes that Gordy’s family might be at a slaughterhouse in Omaha since he delivered a family of pigs from Meadowbrook Farm up to the fattening yards in Broken Bow some time ago and most of those pigs get sent to that slaughterhouse. As Brinks pulls out a confidential file from his briefcase, Jessica tells Hanky that she remembers that Henry once told her that the family owned a sausage factory in Omaha. Sipes attempts to deny its existence and asks Brinks to show them an inventory sheet showing that no such factory is listed on it, but Jake notices the confidential file and takes it and gives it to Jessica, and she sees that the information on the factory is inside of it. Sipes snatches the file back and once again tries to get them to pay no attention to it, but Luke, Jake, and Jessica confront him for hiding this. This sparks a brief fight between Sipes and Luke that ends with Jessica smashing Brinks’ briefcase over Sipes’ head, followed by Luke hitting Sipes with a knockout punch.

Soon after, Gordy, Luke, Jessica, Jinnie Sue, Jake, Hanky, and Brinks (who has turned more cooperative) make their journey to the factory, and Hanky repeatedly calls the factory to try to get it shut down, but none of the calls get through. Brinks confesses that the number listed in the file doesn’t actually reach the slaughterhouse because it uses a different area code, and though he provides Hanky with the correct one, Hanky finds that that line is busy as well. Just as Gordy’s family is about to be killed, Hanky finally reaches the night supervisor and orders the plant to be shut down immediately, saving the pigs. Gordy’s human friends reunite him with his family, and to Gordy’s delight, he also sees that his father is there as well, having saved him in the nick of time, too.

A short time later, Jessica and Hanky purchase Meadowbrook Farm, and they and Luke and his family bring Gordy and his folks back to it. Through Hanky, Gordy invites all of them to stay on the farm, saying that there is nothing better than a happy family. They all agree to, and Luke and Jessica share their first kiss. The movie ends with Gordy’s human friends enjoying their new lives on the farm, and Gordy himself is content. 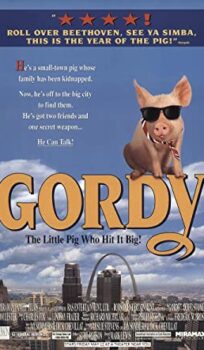