Mousy bookkeeper Kringelein (Lionel Barrymore), who works for industrial magnate Preysing (Wallace Beery) is dying of an unspecified terminal illness, and has come with every penny he owns to the Grand Hotel, determined to blow it all on one final fling.

Dancer Grusinskaya (Greta Garbo) is depressed and contemplating suicide. Baron von Geigern (John Barrymore) is flat broke and needs to steal her pearls to pay off a debt. She catches him red-handed in her room, he falls in love with her and confesses, handing over the pearls. But instead of calling the police she falls in love with him and theyspend the night together. Next morning she is elated, and he promises to join her on the train that evening, and they will go away together.

Industrial magnate Preysing is busy juggling two different deals. He sends for a stenographer, and Flaemmchen (Joan Crawford) shows up. The first deal looks like it’s all off, the other parties start to walk out, but then he bluffs them with the threat of making another deal with “Manchester”, and they hastily come back and sign on the dotted line. However, the Manchester deal had actually been cancelled earlier, so he realizes he is going to have problems further down the road, but figures “in for a penny, in for a pound”. And having gone this far in compromising his ethics, he invites Flaemmchen to come away for a dirty weekend with him, for money, and she agrees.

The Baron is too proud to live on Grusinskaya’s money, so he spends the day trying to round up some money. He steals a drunken Kringelein’s wallet, but then is conscience-stricken, and puts it back. He sneaks into Preysing’s suite instead and steals his wallet. But Preysing comes out of the bathroom and catches him, and beats his head in with a lamp and kills him. Flaemmchen comes out of the bathroom and screams, and runs to Kringelein’s room, who comes to see, and then calls authorities.

Grusinskaya’s entourage conspires to keep her from finding out that the Baron is actually dead (although everybody else in the hotel knows it), because they need her to rehearse tomorrow in Vienna. She leaves the hotel to catch her train, expecting to meet him there.

Flaemmchen goes off with Kringelein, to brighten his last days, for money.

Preysing is led away in handcuffs by the police. 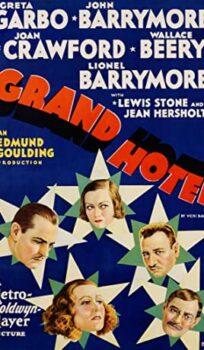