Pooper:
Seita, unable to keep Setsuko alive, dies alone in a subway station. His spirit is reunited with Setsuko’s spirit in the afterlife as fireflies surround them.

Long Ending:
This film was based on the semi-autobiographical novel of the same name by Japanese author Akiyuki Nosaka. It was paired with the film My Neighbor Totoro (a film COMPLETELY different in tone!) and together, these films put Studio Ghibli on the map. Roger Ebert included this movie on his list of “Great Films.”

The film starts with a young boy crumpled in a Japanese Subway station. As people pass by, they call him a bum and say he is disgusting, though one person tries to give him food. The boy collapses and whispering the name “Setsuko” before dying. The boy’s spirit, now released, watches on as some janitors find his corpse amongst many other dead or dying people in the subway station. He notes that the day he died is September 21, 1945 (shortly after World War 2 had ended). A tin of fruit drops falls out of the boy’s pocket and the janitor tosses the tin away. In the spirit world, it lands in a field of fireflies (and we see some ashes spill out).

The boy is a teenager named Seita and his spirit reviews his life. His story starts off near the end of World War 2. Seita is burying some food in his backyard as his mother goes off to an air-raid shelter to work as a nurse. The mom kisses Seita and tells him to take care of his sister Setsuko, who is four-years-old. We see their father is in the Navy and is ostensibly at sea fighting in the war. Suddenly, planes fly overhead and begin fire-bombing the town. Seita grabs Setsuko and manages to escape being killed, although their town is completely destroyed.

Seita and Setsuko head over to a makeshift medical center. While there, Seita learns his mother has been injured. He goes in to see her and she is covered in bandages, her skin having been burned off. The mother dies shortly thereafter, being thrown into a mass grave and cremated with the other victims of the bombing.

Seita is unable to tell Setsuko that their mom is dead, instead, lying that she is sick in a hospital. The kids are sent to live with their Aunt in a neighboring town. Seita returns to his now-abandoned town to dig up the food he had buried and brings it to his Aunt, but he takes a tin of fruit drops for Setsuko. At first, things are ok. As the War continues, however, food is rationed and the Aunt becomes resentful of her wards. She forces the children to sell their mother’s kimonos for food (although the Aunt sold her own clothes too) and also gives better portions of food to her own husband and daughter. The Aunt becomes frustrated that Seita is unable to get a job or enroll in school (though it is unclear whether he even knows how to do either of those things). Though Seita tries to write to his father, no reply ever comes. Nonetheless, the children have a couple of pleasures. Just outside their Aunt’s house is a field full of fireflies. Also, whenever Setsuko gets sad, Seita cheers her up with candy from the fruit drop tin.

Eventually, the pair decide to leave and start their own life (they are warned this is a bad idea). The two set up a home in an abandoned bomb shelter. At first, things are ok as Seita manages to withdraw money from his parent’s bank account. As the War drags on, however, money becomes worthless and the kids resort to stealing food and goods from people’s houses during air raids. Nonetheless, they are happy being with each other and Seita tells Setsuko stories of their dad and the great Japanese Imperial Navy. They also fill the shelter with fireflies to provide light during the nights and they sleep together for warmth.

One morning, Seita awakens to find Setsuko burying all the fireflies that have died in a mass grave. Seita asks why she is doing this, and Setsuko says that their Aunt told her their mother was dead and buried. This causes Seita to weep over the loss of Setsuko’s innocence, but he lies and says that their mother was buried in a fancy cemetery under a beautiful tree and they will visit her grave someday. They set up a burial shrine to the fireflies.

As time goes on, both kids begin getting sick. They are literally starving to death. Though their Aunt and Uncle see them occasionally, they neither invite them back to the house nor offer help. One night, Seita is savagely beaten when he is caught stealing food from a farmer. After stealing food during an air raid, Seita returns to find that Setsuko has collapsed. He takes her to a doctor, who dismisses the pair, saying they are suffering from malnutrition and simply need food (he refuses to provide any medicine). Seita angrily yells that there is no food, and the two return to their shelter. Seita also lies to Setsuko and promises that their dad will be coming home for them soon.

Desperate, Seita goes to the bank to withdraw all the money in the account to buy whatever he can with it. While at the Bank, he learns that the war is over. He also learns that the Japanese Imperial Navy has been completely destroyed, meaning his father is surely dead. Seita buys food (chicken, rice, eggs) and runs back to the shelter where he finds Setsuko in a delirious state. She has been eating clumps of mud (imagining them as rice balls) and glass marbles (thinking they are fruit drops). Seita gives her some watermelon and Setsuko says “thank you.” These are her last words as she dies from starvation soon after. Setsuko spends one last night sleeping in the shelter with his sister’s body.

The next morning, he buys a casket (from a thoroughly uncaring mortician) and he cremates his sister on top of a hill overlooking the field of fireflies. He puts her ashes in the fruit drop tin and permanently leaves the shelter.

Having told his story, the spirit Seita walks the spirit land and finds his sister waiting for him. The two run through a field of fireflies and then sit together on a bench. Seita tells his sister it is finally time for them to sleep as the credits roll. 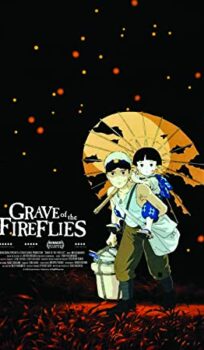