Short Ending:
Hal Jordan (Ryan Reynolds) accepts his role as Green Lantern, one of the members of an elite intergalactic police force and saves the world from the evil entity Parrallax. He has accepted responsibility, captured the heart of his old flame Carol Ferris (Blake Lively), and flies off . Meanwhile, Green Lantern Corp. leader Sinestro (Mark Strong) ends up putting on the yellow ring, seemingly corrupted by the power of fear.

Long Ending:
Hal Jordan is chosen by a dying alien policeman’s ring to become the protector of both Earth and the surrounding space sector using the alien’s green power ring and green lantern (the power source for the ring). The ring is strengthened by the bearer’s willpower (represented by the color green) and Hal becomes a member of an intergalactic space police force – the Green Lantern Corp.. Meanwhile, an ancient evil, Parralax, has escaped from his prison and had killed the alien predecessor to Hal. Parralax feeds on and is powered by fear (represented by the color yellow). After training on  the Lantern’s home planet and being dismissed by their leader Sinestro, Oa, Hal is convinced that he is unworthy of the ring and returns to Earth.

Meanwhile, Dr. Hector Hammond (Peter Sarsgaard) has been infected by the blood of Parralax while conducting an autopsy of the alien’s corpse. He begins mutating and develops telepathic and telekinetic powers which he uses to do misdeeds and fights Green Lantern several times.

Having developed confidence in his abilities, Hal returns to Oa where he finds that Sinestro has convinved the Guardians – the creators of the corp., the lanterns, and the rings – to forge yellow power rings to allow the Corp. to fight Parralax with fear – which he believes is stronger than will. Hal convinces the Guardians to let him fight Parrallax before they go through with Sinestro’s plan.

Hal returns to earth and rescues Carol who had been captured by Dr. Hammond by giving Hammond his ring. Because the ring is controlled by Hal’s willpower, Dr. Hammond is unable to use it and he defeats Hammond. Before Hal can retrieve his ring, Parrallax arrives and destroys Hammond and begins eating Hal’s soul as well. Carol distracts Hal by firing missiles at him from a nearby fighter plane.  Hal manages to get the ring back and engages Parrallax in a big fight. Remembering his training where he learned that bigger things burn more quickly than smaller things, Hal lures the gigantic Parrallax into the Sun’s orbit, where he burns up. Hal passes out, but is rescued from being burned alive by Sinestro and his other friends on the Green Lantern Corp.

The day is saved and the Hal has his confidence and is a rising star in the Green Lantern corp. He has also, finally, captured Carol’s heart and reached his personal potential, finally moving past the self-doubt that arose as a result of witnessing his father’s tragic death. He has taken the mantle of protector of Earth’s space sector, and after kissing Carol, flies into space to tackle other threats.

After the credits roll, we see Sinestro take one of the yellow fear rings and place it on his finger. His suit changes from green to a sinister yellow. 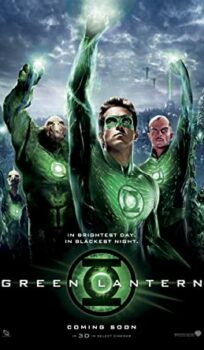