Pooper:
“Clarke”, the comet, strikes Earth and causes, as forecasted, a global extinction-level event. However, John (Gerard Butler), Allison (Morena Baccarin), and their son Nathan (Roger Dale Floyd) all make it to a military bunker in Thule, Greenland, along with many other people, and survive the catastrophe.

Longer version:
As the situation becomes increasingly dire, just hours away from comet “Clarke” impacting Earth -at this point, we have seen smaller fragments of the comet destroy several places all around the world-, John, Allison, and Nathan, while heading to Canada as a last ditch-effort to board a plane to safety, have to flee a shower of fiery fragments that wreak havoc on a highway in New York. John even rescues a man from a burning car, injuring himself in the process.

Eventually, they make it to Osgoode, Ontario, where they block what seems to be the last plane leaving that airport. After pleading with the pilot (Holt McCallany) to fly them along, they all board the plane. It is here everyone learns the final impact will happen somewhere in Western Europe and it will be the equivalent of a global nuclear holocaust.

As the contingent approaches Greenland, another fragment hits, causing a wide shockwave that sends the plane on a tailspin and causes it to crash against a glacier. The passengers are safe, but the two crew guys are killed. However, almost immediately, all survivors are picked up by a military caravan that drives them to the Air Base in Thule. With seconds to spare, as “Clarke” makes its final entry, everyone is rushed underground. A countdown for impact is heard, as John and his family all embrace together and think of the happiest moments in their lives. The screen goes black.

We are next shown images of cities around the world (Sydney, Mexico, Paris, Chicago) completely in ruins and devoid of life, and an atmosphere barely clearing up from all the smoke, dust and ash. Through radio exchanges between the bunker and other various locations around the world, trying to make contact with survivors elsewhere, it is revealed that nine months have passed since “Clarke” destroyed the planet. The bunker doors are opened and everyone is stunned by the obliterated landscape.

The movie ends showing a drastically altered Earth (we see the gigantic glowing crater created by “Clarke”, as well as several smaller ones scattered throughout the land), and with enthusiastic radio interactions between people worldwide, thus hinting humanity will get a second chance to start over. 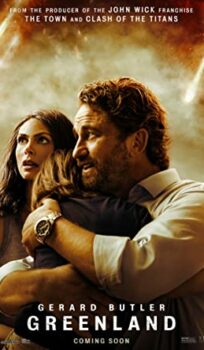