After the gremlins wreak havoc inside the Clamp Building, attacking a lot of the staff there, a plan is made to draw the gremlins out into the lobby of the building with building owner and media mogul Daniel Clamp (John Glover) putting up a fake nighttime backdrop on the windows and turning the clocks ahead 3 hours so the gremlins would think it was nighttime. Then, they’d drop the backdrop and the sun would reduce them to goo. However, before he can drop it, rain clouds form overhead and block out the sun.

After Billy (Zach Galligan) along with Kate (Phoebe Cates), Murray (Dick Miller), Marla (Haviland Morris), and Gizmo (voiced by Howie Mandel) in the lobby realizes that the backdrop isn’t coming down, and after Murray mentions to him that if the gremlins get out in the rain their numbers would multiply like crazy, he tells Murray to get a fire hose and Kate to find the Electric Gremlin trapped in the phone system of the building. Murray sprays the Gremlins with water, causing new gremlins to start forming, but then Kate releases the Electric Gremlin and all of the wet gremlins are electrified into gooey puddles.

Clamp makes Grandpa Fred (Robert Prosky) a news anchor, due to his and Mr. Katsuji’s (Gedde Watanabe) coverage of the gremlins, and he makes Marla his new Head of Public Relations. When Clamp asks Billy for paper to take notes with, Billy pulls out the drawing he made of his hometown of Kingston Falls. Clamp likes what he sees, and decides that he and Billy will work together to remake this town in New Jersey.

The film closes with Forster (Robert Picardo) stuck in a bathroom in one of the higher floors with the female gremlin, Greta, who is in a wedding dress, coming towards him to the gremlins rendition of Here Comes The Bride. 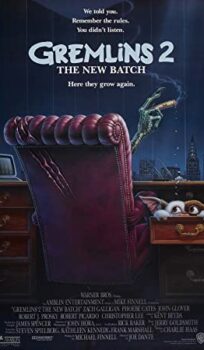