After the gremlins wreak havoc on the town of Kingston Falls and kill some people (sometimes in comical ways), Billy Peltzer (Zach Galligan) and Kate Beringer (Phoebe Cates) destroy all of the gremlins except for the leader, Stripe, who was out in a nearby store getting candy in the movie theatre by opening the gas tanks in the boiler room and igniting the gas, causing the whole theatre to explode.

Billy and Kate notice Stripe and immediately pursue him in the store, knowing that if he touched the water fountain in there, the whole mess would begin again. After a hard struggle, with Stripe managing to touch the water fountain, Gizmo (voiced by Howie Mandel) opens up the blinds near the fountain, exposing the sun, which melts Stripe into a puddle of goo before any new gremlins can be birthed.

Later on in the evening, Mr. Wing (Keye Luke) arrives and takes Gizmo back, and as he leaves says that Western civilization is not ready to care for the mogwai, but after Gizmo says “Bye, Billy,” he tells Billy that someday, he may be ready. Billy’s dad Randall (Hoyt Axton) apologizes for what has happened, and gives Mr. Wing a Smokeless Ashtray he invented as a token of his apology. Mr. Wing takes the gift, and he leaves with Gizmo out into the empty street. 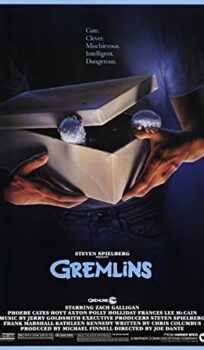